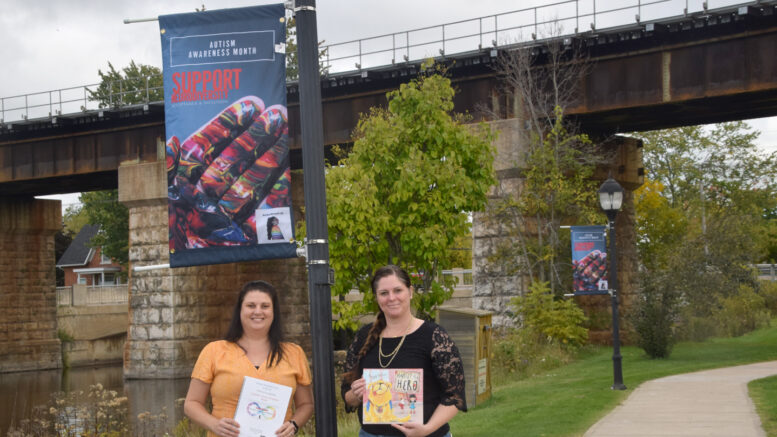 Kelly Stapley and sister Mandy Stapley of Autism Network Lennox and Addington County stand next to one of the banners hung at Springside Park as part of October's Autism Awareness Month. Photo by Adam Prudhomme.

Lampposts along the Napanee River falls have been affixed with banners that promote acceptance and inclusion for neurodiversity.

The banners will hang throughout October in recognition of Canadian Autism Awareness Month.

Mandy Stapley, executive director/president of Autism Network Lennox and Addington County led the initiative to have the banners installed by Town of Greater Napanee staff, as well as to have the town proclaim October to be Autism Awareness Month. Created by Sean Beek Designs, the banners were made possible through a donation from Queen’s Players.

“Recognition and support for those living on the autism spectrum as well as sharing information of this complex disorder is an important task,” wrote Stapley. “It is for these reasons, Autism Network LAC chose to invest in annual banners in support of neurodiversity.”

Stapley hopes to have the banners hung every October going forward to help start a conversation about autism in the community.

Once again this year the Napanee River falls will be illuminated blue throughout October in solidarity of the Light It Up Blue for Autism movement.

In celebration of the month Autism Network LAC will also be donating copies of local author Peggy Collins’ book Harley the Hero to 17 school libraries across the Limestone District School Board. The children’s book includes a main character that is on the spectrum and helps to make it relatable for a younger audience. The book donations were made possible through a sponsorship from L&A Financial.

On Oct. 16 Autism Network LAC will team with Napanee’s Disco Ball Events for their annual charity roller skate event, held at 170 York St from 2-5 p.m. Tickets for the event can be purchased in advance at https://www.discoballevents.com/.

Canada Autism Awareness Month as first declared in 1993 in an effort to encourage people to learn more about the features and social effects of Autism.

An estimated one out of every 68 children is identified as having autism spectrum disorder (ASD).