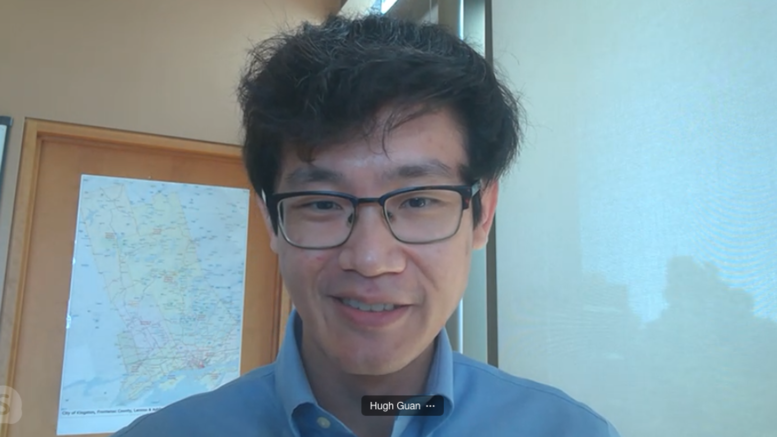 Slowly but surely KFLA continues to creep towards the magic mark of being 90 per cent vaccinated, which is when the region would start to achieve herd immunity.

Dr. Hugh Guan, KFLA Public Health’s acting medical officer of health, spoke of the importance of reaching that number during a Skype call with local media on Wednesday.

“As of yesterday KFLA has had 87.3 per cent of those 12 and over having received one dose and 81.8 per cent those 12 and over having received two doses,” said Guan. “We continue to go at a pretty steady pace. I think it’s been a lot greater than it was maybe a month or two ago I think our first dose increase anywhere from a .8 to a one per cent a week and our two dose coverage is rising about a one to 1.2 per cent over the last few weeks in terms of a seven day average.”

That’s slightly better than the provincial average of 86.1 per cent for one dose and 80.7 per cent for being fully vaccinated.

“We’re a little bit above the Ontario average, and we’re slowly but surely making our way to those 90-90 targets and if we continue to go at this pace we’ll definitely hit 90 per cent first dose by probably by December and two doses hopefully shortly there after.”

Guan outlined some of the benefits of reaching that target.

“Getting to that 90-90 or really if we could 100-100 type of deal really starts reaching that level of herd immunity,” said Guan. “We will see less cases, we will see less outbreaks and less impact of outbreaks. Transmission chains will start to slow down and disappear altogether which means from a societal level we can start thinking about pulling back some of these Public Health measures if we’re starting to see less and less transmission. Really these kind of go hand and hand with each other. If we start seeing much less transmission due to vaccination then we should start pulling back on some of these Public Health measures that we needed to have in place.”

In an effort to reach the remaining 20 per cent who are yet to get a shot, KFLA Public Health is opening some permanent vaccine clinics. They will also help make third doses more accessible.

“We will be restarting some permanent clinics,” said Guan. “We will have a permanent clinic coming to the Cataraqui Centre beginning Oct. 7 in the Kingston region. We continue to have our clinic at our Napanee office in the L&A region. The volume of vaccine is increasing especially with some of these recommendations about third doses that have come over the last few weeks and the formats for mobile clinics is less suited for higher volumes.”

On Wednesday the province reported 495 new cases, 11 of which were from KFLA. Guan said Ontario’s cases have stabilized of late.

“Thank you to everyone in our community and everyone in Ontario for truly flattening the curve,” said Guan. “In Ontario our curve is pretty much flat not just in cases but in terms of hospitalizations and ICU admissions. Thank you everyone in the community and to our partners and to KFLA volunteers and staff for really flattening the curve across the province. We are very much saving our healthcare system and we see some of things going on towards the west of Canada. We really don’t want that to happen and we really hope that doesn’t happen locally. At this pace it should not happen if we continue to have our curve pretty flat.”

In terms of cases in schools, Guan says protocols appear to be working. An outbreak declared at Loughborough Public School on Sept. 26 appears to be under control.

“We do want to keep children in school for as long as possible as we know that it’s beneficial for their mental and social and physical being,” said Guan. “Currently all the case are very well managed and all the outbreaks are very manageable so I do not think it’s overwhelming us or even the local schools at this time.”

As traditional flu season approaches, Guan encouraged people to consider getting the flu shot as well.

“We’re just starting the fall and winter so we’ll still need to have our guards up in terms of adhering to all the good Public Health measures everyone has been doing and hopefully we continue to keep cases as well as our hospitalizations and ICUs down,” Guan added.

Flu shots are expected to be made available towards the middle of October.