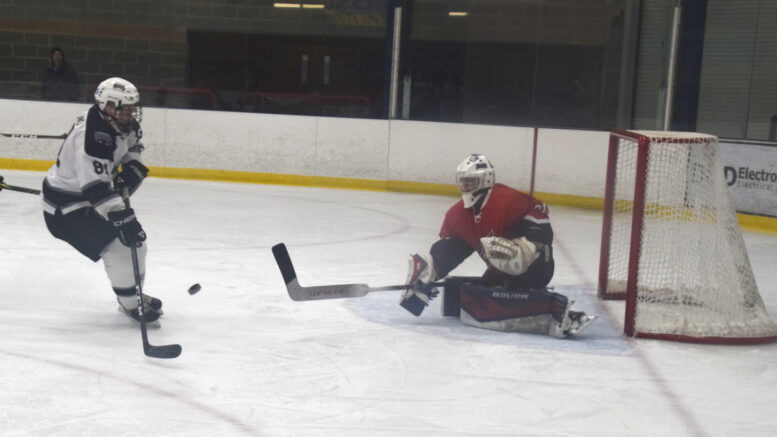 The Napanee Raiders gave their fans a thrilling finish to the pre-season on Friday at the SPC, picking up a 2-1 overtime win over the Picton Pirates.

Marshall McFarland scored both goals to lift the Raiders to victory, keeping them undefeated in the pre-season. Mitch Bown earned the victory in net, allowing just a power-play goal to Derrick Vos in the middle frame. Napanee finished with 37 shots on the night as Picton’s Nolan Lane stood tall in net despite the loss.

Napanee went 3-0 in the pre-season as they gear up to return to meaningful games for the first time in over 18 months.

Napanee will now turn their attention to the regular season, welcoming the Amherstview Jets to the SPC on Friday for a 7:30 p.m. puck drop. Doors open at 6:45 p.m. and fans over the age of 12 will require proof of vaccination, photo ID at the door. Tickets are $10 for adults, $8 for students and seniors and $5 for children under the age of nine.

The Raiders season is scheduled to feature 35 games, with the season set to conclude on Feb. 12. Games will all be within the Tod Division with no regular season crossover with the Orr Division.

The Raiders will get a look at the league’s newest team, the Frankford Huskies, when they host them on Oct. 8 at 7:30 p.m. at the SPC for the second game of the season. The Huskies join the league just in time to replace the Gananoque Islanders, who dropped out of the league and rebranded as a senior team following the pandemic shortened season. Aside from the Islanders the Raiders will take on familiar foes in the Picton Pirates, Port Hope Panthers and Campbellford Rebels, as well as their cross-county rival Jets.