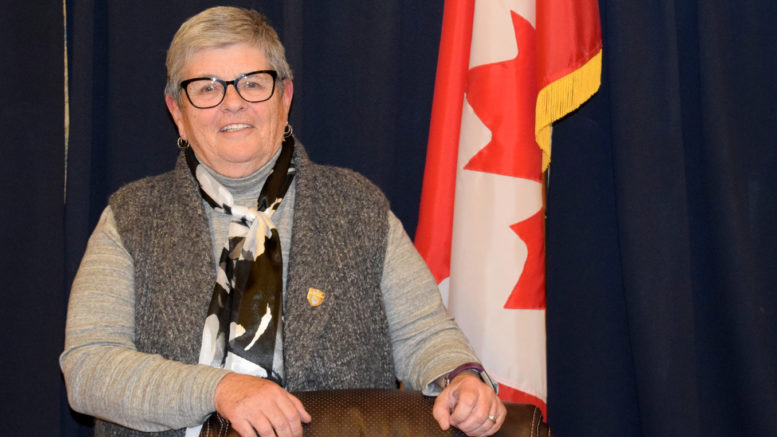 A call for Mayor Marg Isbester’s resignation was made by councillor Bob Norrie during Tuesday’s council meeting, held at Selby’s Community Hall.

Norrie issued the request after Isbester was found to have contravened a town policy for the second time this month, this time the code of conduct for members of council.

Norrie’s request found no support around the horseshoe. Council instead passed a motion to issue a formal reprimand to Isbester while calling for her to issue a written apology towards those who witnessed or were the subject of her conduct, to undergo a formal review of the town’s social media policy, to work with a town provided counselor or coach and for the town to provide support made to complainants who filed complaints against the mayor.

The motion was made following a presentation of findings from an investigation into two allegations of threats made by the mayor to two residents. Greater Napanee’s Integrity Commissioner Laura Dean of Aird and Berlis LLP concluded the mayor breached two sections of the code of conduct-one section that related to discrimination and harassment, the other improper use of influence. One threat alleged the mayor said she would ‘go after you with everything I got’ during a phone call with a resident who had accused the mayor’s son of authorizing the dumping of lumber under a sign that read ‘free’ near the resident’s home. The second complaint alleges the mayor threatened, on two separate occasions, to burn down a resident’s house.

Dean joined council’s Selby Community Hall chambers via phone to outline the allegations against the mayor.

“To summarize, two formal complaints were filed with our office, in June of this passed year, 2020,” Dean told council. “I will refer to them as Complainant 1 and Complainant 2. These complainants allege that Mayor Marg Isbester contravened the town’s code of conduct for members of council, specifically that she contravened Sections 9 and 10 of the code by threatening Complainant 1 on Dec. 24, 2020 and by directly threatening Complainant 2 on a telephone call in November 2020 and then repeating these threats on two occasions at the town’s fire hall.”

Both incidents were outlined in a report submitted to council.

“The mayor telephoned Complainant 1 from her car while remaining at the site of the property, and acknowledged that she reported that the dumping been authorized by her son,” reads the report. “The response states that Complainant 1 commented that he did not want the area to “become a mess.” According to the response, the mayor does not recall what she answered in response to Complainant 1’s statement, but denies issuing any type of threat against him.”

In the report the mayor admits she may have used some words that ‘might have been a little pointed’ and ‘fairly unChristmas like’, but maintains she did not make any kind of threat.

“From the Mayor’s perspective, it was Christmas Eve. It was pouring rain,” reads the report. “COVID-19 restrictions remained in place. The mayor attended the property in question shortly after she was called by

Complainant 1 to respond to his concerns. The mayor was satisfied that the dumped lumber would be removed. It appears that the circumstances provoked an uncivil and perhaps threatening response by the mayor towards Complainant 1.”

As for the second complaint, Isbester says her comments about burning down a resident’s house were made “in jest and in support of our firefighters”. The mayor also states that her statements were “made out of concern and wanting staff that I work with to know that I was supporting them.”

“In our opinion, it would be inappropriate to recommend a suspension of remuneration paid to the mayor in the circumstances of the complaints,” reads Dean’s report. “Despite the fact that the mayor has apologized to Complainant 2 for the comment she made directly to him, it is our recommendation that Council denounce the mayor for her conduct in repeating these comments at the fire station. In this circumstance, a reprimand is warranted.”

“It’s very difficult for this council to carry on with the duties and I know it’s not a very positive thing to say, but I’m going to ask you mayor to do the honourable thing and step down as mayor so we can continue to move forward as positive and respective members of this council of this town,” said Norrie.

“In the last two weeks your actions have put Napanee in the print news, online news and even on the 6 p.m. news and has brought unwanted negative attention to our town,” said Pinnell, referring to the Sept. 14 meeting where Isbester was found to have contravened the town’s conflict of interest act for not declaring a conflict of interest in regards to dealings with Heritage Park, for which her son had expressed an interest in purchasing. “For the most part I do think that you do a great job as a mayor and you’re trying to look after the best interests of the town and its residents.”

“Repeating it two other times in the presence of professional firefighters is very concerning to me,” said Pinnell Jr. “I do feel these actions have embarrassed the corporation of Greater Napanee, the staff, the residents and us as councillors.”

Councillor Ellen Johnson noted that council had limited action and was surprised to learn was required to address the issue on Tuesday and was unable to defer it without seeking more legal advice.

“Facebook bullying has resulted in a loss of staff and sometimes the agenda of a few has driven discussions as to how the town conducts business and plans for the future when this input should come from many,” said Johnson. “I think the most important thing we need to consider is how do we move forward.”

She also added the town has some important issues coming up over the next year, the final of the four year term. Those include the budget and the proposed Tomlinson asphalt plant.

“Social media extraverts are calling for extreme action,” said Johnson. “Does this require a mini election? Is it even legal? As councillors it is also our job to represent all our constituents, are we hearing a balanced opinion, a few, or just a call for, I don’t even know what to call it.”

Deputy Mayor Max Kaiser, who took over the mayor’s chair for this portion of the agenda, noted he has known Isbester probably the longest of all council and considered her a friend.

“I certainly don’t want any of this to be any part of your legacy,” Kaiser said, looking towards the room at Isbester. “You’ve done so much good in this municipality, 11 years on council to date and you’ve put your heart and soul in it. Even by the standard of Gord Schermerhorn’s involvement, nobody can touch the time involved you’ve put into the council, all the roles, all the supplementary roles, all the extracurricular that you’ve done on behalf of the town, both council and the town community as a whole. I don’t think it would be fair for you to be remembered by this. Councillor Norrie made a suggestion to that effect that all the good we’ve done in the last couple of years gets lost in the moment but I just don’t think it’s fair, all the good you’ve done over the years.”

Kaiser added council was struggling to find an action that was fair and adequate on the spot without being able to defer it for further legal input. Kaiser said it would also be appropriate to inquire as to how much these two reports have cost the town, but that would come at a later date.

Councillor John McCormack said he would support the motion but added he would have an issue if more complaints were to come forward against the mayor in the future. When asked if there were any other complaints currently being investigated, Dean said there were none, to which Isbester confirmed.

Councillor Terry Richardson put forward the successful motion, which was passed with a vote of four to one, Norrie the one opposed.

Prior to the vote, Isbester had a chance to address the report.

“In no way this evening and I going to attempt to be looked on to be excused or to diminish the findings of the integrity commissioner,” said Isbester. “I will deal with Complaint 1. With Complainant 1 I apologize if the complainant felt I was being uncivil or hostile. It was not my intention. The integrity commissioner has explained the condition well that surrounded the event. As I have always tried to be reactive to calls, I answered it. Complainant 1 had been to council a short time before with a concern for flooding in front of his home and it was pouring rain. Not knowing what property he was concerned about, once the conversation started and I saw the property, I should have simply have asked that he call the 1-800 after hours number and let staff deal with it. But, I did not. I will stay with my conviction that I did not make the comment that Complainant 1 has cited. But as I told the integrity commissioner, with the conditions and the day, I may have been less than polite. With Complainant 2 I have and will again apologize. Whether this issue came forward before or after the timeline, I answered the concerns with the integrity commissioner regardless of them, even against legal advice. I should have done one of two things with Complainant 2, different words to encourage a let up on my family and the people that I work with or just let it keep rolling and accept that it’s part of my job to accept all and any statements. These are statements that should not have been made in any context, in any setting and to anyone as my position as mayor. To staff and council I apologize for putting you in this position that does reflect badly on council as a whole. These are my doings and not in any part of council in the same way that the conflict of interest were.”

Prior to the motion Isbester said she would accept council’s motion and would continue to work with all members of council.