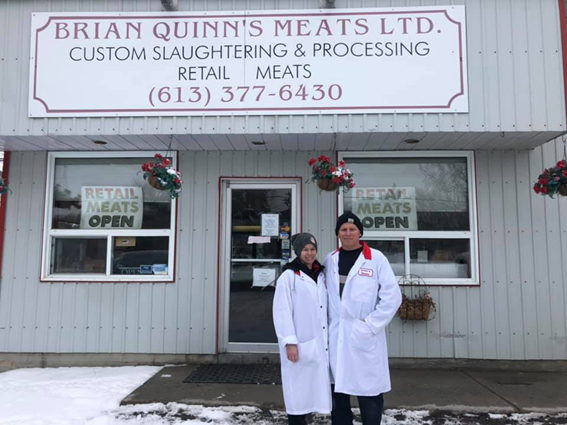 That would be a huge benefit to local farmers, as Quinn’s remains one of the few abattoirs left in Eastern Ontario. When the Enrights, owners of the Tweed-based Enright Cattle Company, bought the company in February, local farmers feared that they would use it to process their own animals exclusively.

“We have never actually stopped taking outside clients,” said Kara. “When we purchased the abattoir there was other local farmers, cattle, pigs and lambs and everything booked every single week all throughout the entire year. We’ve continued to honour that booking every week. We plan to add to the number of animals that we’re able to process and the amount of meat that we’re able to cut and package but what we’ve found is our biggest challenge is we don’t have access to skilled labour.”

That lack of skilled labour remains their biggest obstacle to growing their operation.

“It’s a dying trade,” said Kara of meat harvesting. “It’s something that takes a long time to developed those skills. You can’t just come in a couple weeks and be a good butcher…you have to develop those skills and work on them and a lot of memory work. There’s a lot of fine-tuning and hand-eye coordination and then getting up to speed and being really quick and efficient at it. It’s just something that takes a lot of practice, it’s a real skill to be a really good butcher.”

The problem isn’t exclusive to this region. Though few abattoirs remains operational, they all face staffing issues.

“It’s a common theme,” said Kara. “They could all process more meat. They have the cooler space, they have the equipment, they have everything available to do more, except for the skilled labour.”

“The whole industry needs a program to train people that are interested in developing those skills,” she added. “We are training in house here at the abattoir. We have staff that we’re training to be butchers, but it’s a slow process.”

As beef farmers themselves, the Enrights are committed to the idea of local food, and understand the key role an abattoir such as Quinn’s can play in supporting local farmers and in improving local food production.

Boosting processing capacity is just part of what the Enright’s have in mind for Quinn’s.

“Our intention is to renovate the store, give it a facelift, increase the shelf space and make room for other farmers to showcase their products,” said Kara. “We currently employ 22 people but ultimately we will need to grow our team to meet the current demand.”

Brian Quinn first established Quinn’s in 1976. After operating the business for 45 years, Quinn retired and sold the business to the Enrights earlier this year.