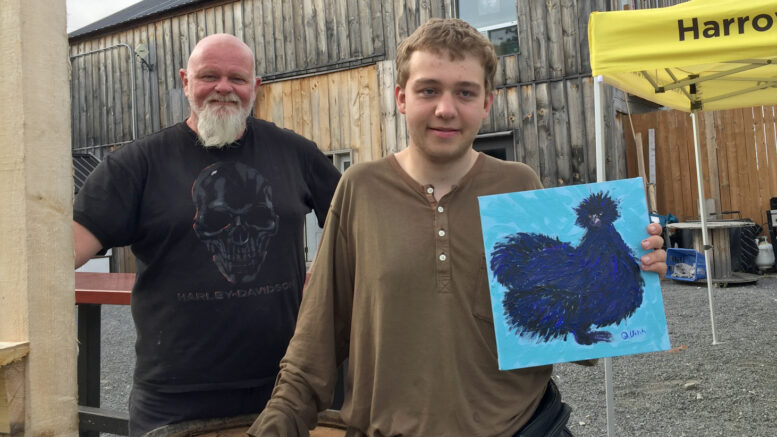 Craig Sindall will incorporate former NDSS student Quinn Doyle's artwork onto some of labels of his brewery. Photo by Nancy Yanaky.

Needing some farm-themed artwork for the label of a soon-to-be-released beer, NDSS teacher/brewery owner Craig Sindall turned to one of his former students.

Recent graduate Quinn Doyle’s style of painting was the perfect fit for Sindall’s Harrowsmith Brewing Company’s latest product. A member of NDSS’ School to Community program, Doyle’s artwork was recognized in February as a regional winner of the Ontario School Teachers Federation’s Student Achievement Award, which called on students to submit material that showed kindness is a renewable resources. For the contest Doyle painted a scene of himself rescuing a snapping turtle from the road near his home in Tamworth. NDSS’ School to Community program is for students with developmental disabilities and encourages them to explore their creative talents.

“I’ve always liked his artwork, I’ve had him for a couple classes,” Sindall said of Doyle. “I approached him about doing a label for the beer. Right now we’re contract brewing so we’re going to have four beers in the liquor stores. Then we’re going to be brewing here at the barn doing small batches so we’re going to use some of the paintings for the small batch labels.”

Using the 200-year-old barn on his property as inspiration, Sindall and his son have created a line of beer products. Renovations are underway to open a restaurant and brewpub for the summer of 2022, as well as hosting weddings.

The label featuring Doyle’s artwork will have a cow as the main focal point with several farm animals in the background. Sindall said given the age of the barn, it’s likely that all of those types of animals would have lived in there at one point in time.

Since graduating from NDSS last year, Doyle’s family has moved from Tamworth to Perth. Doyle has continued his love of painting and often finds inspiration from his neighbour’s yard, which is home to a peacock named Earl, among other barn animals. When he’s painting in his front yard he’s often surrounded by the sound of clucking chickens and rosters, serving as the perfect muse for his creations.

Last week Doyle and his former teacher Nancy Yanaky took a trip to visit Sindall’s property in Harrowsmith to see some of his paintings on display. The barn will also serve as a gallery of sort for Doyle, where his artwork will be showcased and available for purchase.