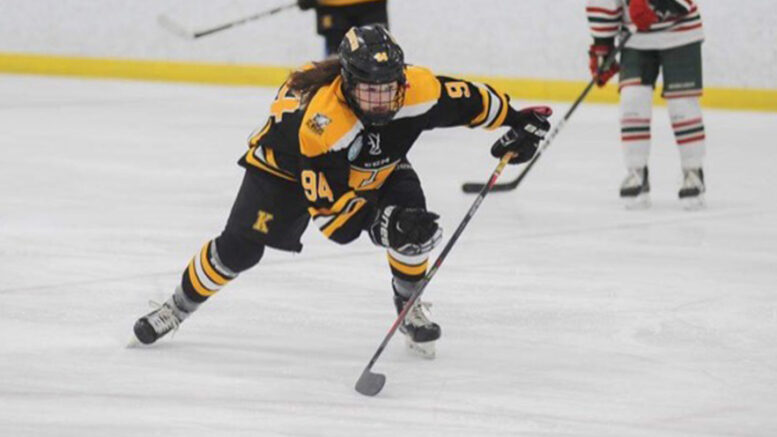 Maddy Cronkwright, seen here with the Kingston Ice Wolves, has been recruited to play for the Brock Badgers.

Napanee’s Madison Cronkwright is one of four new recruits who will suit up for Brock University’s women’s hockey program this season.

The situation couldn’t have panned out any better for the 19-year-old who was prepared to wrap up her competitive hockey days and prepare to focus on academics. Much to her delight, it turns out the school’s hockey team was just as interested in having her joining their program as she was in enrolling at the St. Catharines based university.

Cronkwright, who first got her start in hockey at the age of four with Napanee’s IP, was a member of the Kingston Ice Wolves in 2019 when she caught the eye of the Badgers scouting staff.

“We were at a tournament and my coach pulled me aside and said there was someone wanting to talk to me, it was one of the scouts, Brad Nicholson, he’s an assistant coach as well as a top recruiting scout at Brock. It was definitely a shock because I wasn’t aware I had the ability to play post secondary and continue my playing career and it was just a shock that all the hard work that had been going into it over the years (paid off),” she said.

Cronkwright joins the team as a two-way forward, capable of playing at wing or centre.

“Madison plays a full 200-foot game and is strong in all three zones of the rink,” said Nicholson in a press release on the Brock Badgers website. “She is a smart player who is highly competitive and is strong in the faceoff circle. Her versatility will be a valuable addition to our line up.”

Cronkwright played with the Napanee Crunch through her second year of peewee before joining Belleville for a few years, returning to Napanee for a season and then playing the last two with Kingston. In her last full season she had seven goals and four assists in 38 games for the Wolves of the Provincial Women’s Hockey League while also playing four years with the NDSS Golden Hawks.

“It’s a pretty tough mental challenge to hang up your skates after your years are done,” said Cronkwright. “I’m definitely fortunate to continue on.”