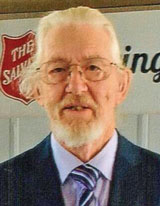 David passed away peacefully at home on Saturday, August 28, 2021, at the age of 80. Beloved husband of Patricia (nee Loke). Lovingly remembered by his daughter Christine Lee (late David) and by her mother Diane; his son Ted (Anne-Marie); grandchildren Jeffrey, Danika, Chelsea and Maximus and great grandchildren Corbin, Freya and Charlotte. Also lovingly remembered by Patricia’s children and their families. Predeceased by his wives Linda and Yvonne, his son Stephen and granddaughter Hailey Paige. Survived by his sisters Judy (Peter) and Puddie (Alan). David was a man of many talents. He always had two or three things going on all at once. Born in Montreal, David delivered newspapers at a very early age. At age 18 he joined the Canadian Armed Forces Signal Corp. He then went on to own and operate Chateau Painting and Decorating for over 40 years. He was an ordained Pastor for 25 years and an Intake worker for 25 years at Ryandale Shelter for the Homeless. He was also the Ship Pastor/painter for over 40 years on the Canadian Empress. His life was blessed with many friends and acquaintances. He will be greatly missed. The family received friends at Payne Funeral Home, 178 Main St., Odessa, ON K0H 2H0 (613-386-7373) on Wednesday, September 1, 2021 from 12 – 1:30 pm. A Graveside Service followed at Wilton Cemetery at 2 pm. In lieu of flowers, memorial donations to a charity of choice would be appreciated in memory of David.

Please share your memories and condolences with the family at www.paynefuneralhome.com