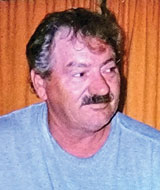 We are deeply saddened by the sudden passing of Edward Caron of Selby at Belleville general hospital on August 24th, 2021 at the age of 75. Beloved companion of Bonnie Bristol. Will be greatly missed by Chris McFarland (April), Kevin McFarland. Her grandchildren Justice (Myles) Yasmine, Noah and Liam McFarland. His children Nicole Caron, Michael Caron. His grandchildren Michael Felhaber, Britney Felhaber, Dustin Detlor Jordan Detlor and Rylee Caron. His great Grandchildren, Nevaeh and many more. His sister Colleen Maracle (Harry), Aunt Gwen and many other siblings in Alberta. Also many nieces and nephews. A funeral will be held at the Belleville cemetery and will be announced at a later date.