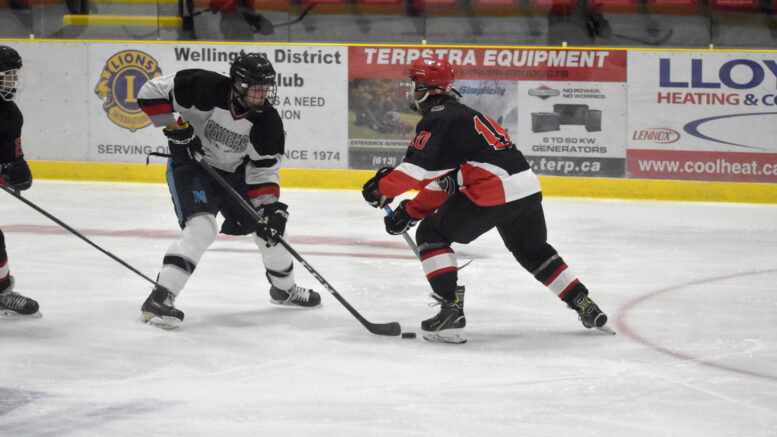 Chris Edwards of the Napanee Raiders skates between a pair of Picton Pirates during Sunday's exhibition game, played in Wellington. Photo by Jason Parks.

Looking to shake off the offseason rust, the Napanee Raiders travelled to Wellington to take on the Picton Pirates on Sunday in a friendly modified pre-season Junior C hockey matchup.

Napanee’s Ethan Broek scored with just over five minutes left to play to break a 4-4 tie and lead the Raiders to a 6-4 victory. Colby Leaver added another in the final two minutes to secure the win.

Played at Lehigh Arena, the exhibition featured lineups of 12 skaters limited to 15-minute periods. Perhaps most importantly, the game was played in front of crowd of just shy of 100 spectators, the first time the two teams had played in front of fans since their March 2020 playoff series was cut short due to the pandemic.

Matt Sheehy scored twice for Napanee while Cole Campbell and Rheydon McCoy also tallied in the win. Logan Vale picked up the victory in net.

The Raiders’ regular season is scheduled to get underway Oct. 1.