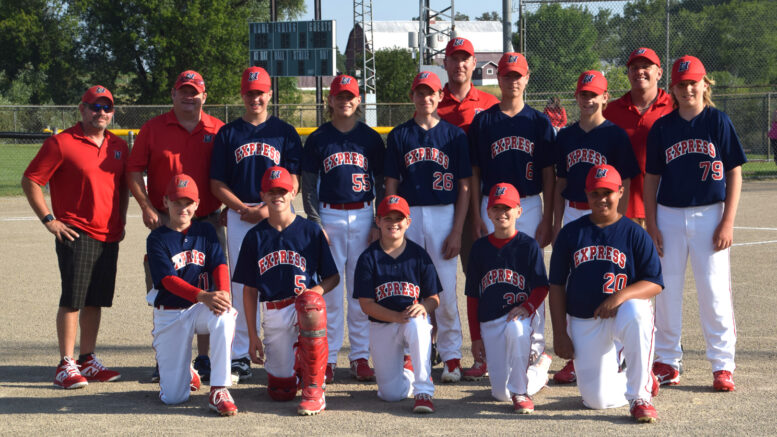 The Napanee U14 Express get set to host the OASA Provincials this weekend at the Fairgrounds. Photo by Adam Prudhomme.

Napanee U14 Express will host Ontario’s best for the OASA Provincials, Aug. 14-15 at the Fairgrounds.

The Express enter the tournament looking to rebound after coming up short at eliminations last weekend.

Napanee started out strong, defeating Kenmore 20-0 before falling 9-2 to Wilmot-Baden.

Napanee rebounded for a 13-5 win over St. George but saw their tournament come to an early end with a 5-3 loss to Tara.

“We didn’t hit how we normally hit,” said Express head coach Scott Thompson. “We have a really great group of kids and it was a great learning lesson for everybody. The teams up there are strong and we just didn’t have the normal weekend that we would have at the plate but it was a great weekend for us to start getting some games in and start getting ready for Ontarios this weekend in Napanee.”

Napanee opens the provincials against St. George at 9 a.m. on Saturday. A win there would grant them a rematch against the Wilmot-Baden team that defeated them at eliminations. Wilmot-Baden would go on to win the eliminations.

“We’re excited because everybody will get to come out and watch the boys,” Thompson said of playing at home this weekend. “It’s close for all the families, everybody gets to sleep in their own bed and hopefully we’ll be able to perform at the top level.”

Following the provincials the Express will head to Fredericton, NB for the Eastern Canadians, which run Aug. 19-22.