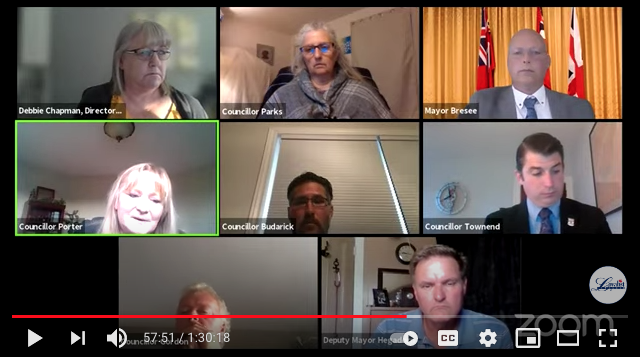 Loyalist council met via Zoom on Monday night for a regular meeting. Among the topics discussed was councillor Penny Porter, who was found to have been in violation of the Municipal Conflict of Interest Act.

Loyalist Township Ward 3 Councillor Penny Porter won’t yet face removal from council, despite having been found to be in violation of the Municipal Conflict of Interest Act (MCIA).

She may however face penalties based on the findings of a code of conduct investigation, which council voted in favour of initiating.

In his presentation to council on the matter, Loyalist Township’s Integrity Commissioner John Mascarin made it clear though he felt Porter was in violation of the act, it wouldn’t be in the public’s interest for the township to incur legal costs by taking the matter to court. Only a judge could remove Porter from council on a matter relating to the MCIA.

Mascarin outlined his report to council during its Monday’s meeting, which was streamed on Loyalist’s YouTube channel.

In it he indicated Porter, who owns a holding company, failed to declare a conflict of interest prior to taking part in discussions of proposed modifications to the township’s official plan during a meeting last December. The report found Porter’s company, which planned to develop a property in Odessa, would benefit from the proposed changes. Mascarin’s report noted Porter put forward changes to the official plan to re-zone her property from low density to high density, which would allow her proposed 16 one-bedroom apartment buildings a better chance of being approved.

Despite his finding, Mascarin noted there were only three instances he could find in which an integrity commissioner recommended an Ontario township take a matter to court.

“We have taken the position and do very believe it is not in the public’s interest of us to the township to incur significant legal costs to pursue one or more of the statutory penalties that only a judge may impose under Section 9 of the Municipal Conflict of Interest Act,” he added.

For her part, Porter maintained she felt she had done nothing wrong on the matter.

“I was really shocked and dismayed by the report for a variety of reasons,” said Porter. “I guess shocked because I’ve always been very diligent and very careful and very conscientious of declaring conflict of interest. As you all know I’ve declared it many, many times. The reason for the shock was I did do my due diligence. I did have a legal opinion by a law firm that specialized in the Municipal Act, they advised me that I was not in conflict in this particular situation.”

Porter went on to say she sought a second legal opinion which she says also indicated to her she would not be in violation of the MCIA if she put forward changes to the official plan. She says she put forward the amendments in response to calls for more affordable housing in the community.

“This policy was something that I felt we needed to change because every year we hear a presentation about affordable housing,” said Porter. “My intentions were honourable in this case.”

“I got two legal opinions and I acted accordingly and I acted on their advice. So, you know, I don’t know what any one of us could do more than that,” she added.

Councillor Nathan Townend noted though the commissioner’s options were essentially limited to litigate or not but he felt the township had more options and obligation to respond to the report’s findings. He put forward the motion that the full report be posted to the township’s website and that the integrity commissioner conduct a code of conduct investigation into the matter.

The motion passed on a recorded vote, with six of seven voting in favour. Porter declared a conflict of interest on the matter and did not cast a vote.