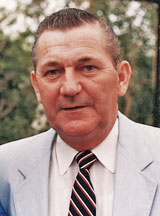 Edward (Ted) Stephen Cavanaugh died at the Belleville General Hospital, on Saturday, June 12, 2021 in his 91st year. Ted is survived by his loving wife of 64 years of marriage Joan, their children Judy (Dan), Steve (Sue), and their grandchildren Jesse, Mike (Kaitlin), and Tyler (Carly). Predeceased by his father Joe, mother Mary, sisters Eileen, Rita, Madeline, Mary and Carmel, brothers Jack and Ray. Ted had an amazing career with Canadian Pacific Railway. He began his career as a Trainmen in Trenton in 1950. During his 43 years with CP, he was located in Chapleau, Sudbury, Winnipeg, and Toronto. He worked in several departments including in Safety, Labour Relations, and Operations until his retirement in 1993 as the Vice-President of Operations and Maintenance. A private visitation has been held at the Burke Funeral Home (613-968-6968), 150 Church Street, Belleville. Funeral Mass was celebrated at St. Joseph’s Catholic Church, Belleville. Interment Holy Name of Mary Cemetery, Marysville. The family has requested that donations be made instead of flowers to the Belleville General Hospital. Specifically, on the donation page under designation please select “Other” and enter Sills Three Rehab Stroke Unit. <https://bghf.ca/give-in-memory-in-honor/>

Online condolences can be made at www.burkefuneral.ca