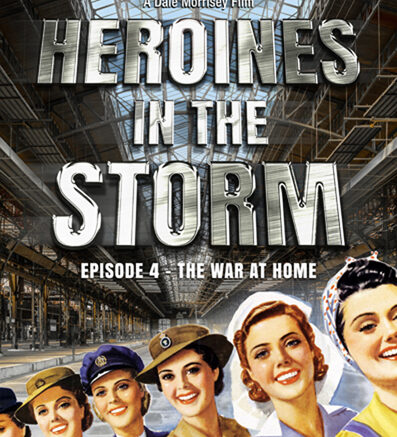 The poster for Dale Morrisey's Heroine's In The Storm, which was based on a book written by Sherry Pringle. The film is now available on Hoopla through the L&A County Libraries.

Napanee filmmaker Dale Morrisey released the final episode of his miniseries, Heroines in the Storm, on Hoopla last Tuesday.

The four-part series, which focuses on women who lived through the triumph and horror of WW II, is inspired by the acclaimed book Extraordinary Women Extraordinary Times, by local author Sherry Pringle.

“Sherry and I are co-executive producers on the series,” Morrisey said. “Sherry has played a key role in the project, helping with lining up emails, brain storming story ideas and helping formulate interview questions. Without her this project does not happen.”

Morrisey started the series with episode four instead of starting with episode one because of some ties to Napanee.

“The joke in the house is that I made chapter four before I made the other chapters and I was trying to be like George Lucas who made chapter four of Star Wars before he made the others,” expressed Morrisey. “The fourth episode is titled The War at Home and as you might guess, focuses on contributions made by women to the war effort on the homefront. The episode was tackled first because of some ties to Napanee, not the least of which are Gibbard’s wartime contributions and the Gibbards Girls. The episode explores the role of women in wartime industries, the land army that helped bring in crops, women taking up professional baseball to fill a void left by major league players marching off to war, and war brides. My grandmother was a war bride so it was extra special to me to be able to tell the story of war brides in this episode. This episode was cut together first because it was supposed to screen at the Lennox & Addington Museum and Archives but then COVID hit and those plans had to be scuttled.”

All episodes are expected to be released this fall.

“The plan is to have all the episodes available by November on several platforms,” Morrisey stated. “The hoopla launch is a soft launch of the series and came about in part because of the failure to get a licensing deal done between the distributor and a major Canadian public broadcaster and its streaming service. The plan and the hope is still to have the series air on television in Canada as well as find a streaming home as well before the year is out. Even though each episode has a chapter number and chapter title, I wrote and edited the episodes so they can be viewed as individual or stand-alone programs. You can watch all four episodes in any order or you can just watch a single episode and still get just as much from the experience.”

To watch Heroines in the Storm for free in L&A County a user can download the hoopla app onto their smart TV or device. Log in or create an account using s L&A County library card and then they can rent an episode four for free as part of their monthly rentals.

“It has been a long journey for Sherry and me to get this project made,” said Morrisey. “There have been some challenges pop up along the way, but even with those challenges, this film has been a real joy, a real passion project for us both. And, Sherry has really made this a great project to work on, before COVID she and I had many road trips to shoot interviews for the film.”