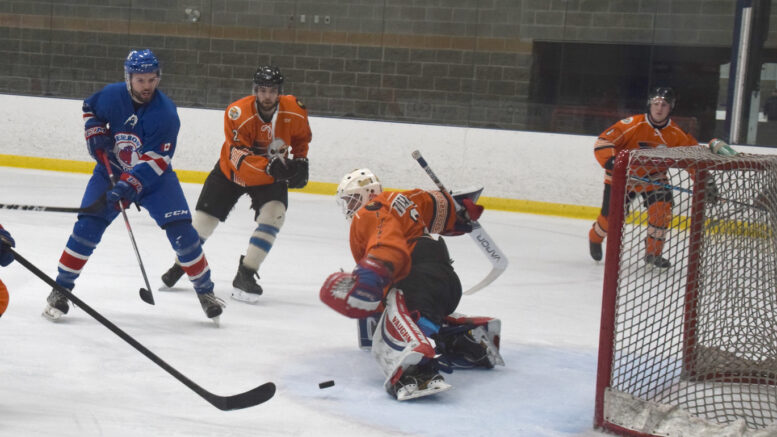 Deseronto's Jordan Cannons watches as Frontenac goalie Brennan Smith stretches to attempt a pad save during Wednesday's exhibition game at the SPC. Photo by Adam Prudhomme.

The Sr. A Bulldogs held a 3-1 lead into the third period before the Phantoms rallied back to earn a 3-3 draw.

Mitch Thompson opened the scoring for Deseronto with an assist from Michael Anson and Jordan Cannons.

The Phantoms responded late in the first when Colton Distefano scored with help from Nathan Mutch and Josh St. Peter.

Newly acquired Brodie Butt gave the Bulldogs a lead in the second, firing a wrist shot from just inside the blue line into the back of the net for a short-handed goal. Craig Cross and Brody Morris picked up assists on the play.

In the third Anson slipped the puck through the five hole to give the Bulldogs a 3-1 lead. Cannons and goalie Trevor Withers earned assists on the goal.

The Phantoms managed to rally in the final half of the third, picking up goals from Dustin Sinclair and Dawson Chard. Matt Horton, Brandon Torres, Distefano and Andrew Dekroon each earned assists on the two goals respectively. Withers made the start for the Bulldogs in net, countered by Brennan Smith for Frontenac.

Still, the team teams were able to get some game action as they look ahead to what they hope is a more normal regular season starting in September. The entire 2020-21 regular season was cancelled due to the pandemic.

The Bulldogs will look to continue weekly exhibitions with the Phantoms, with the next one scheduled for March 31 at the SPC. Once again the game will be closed to fans.

The league has scheduled May 30 for their draft, which will take place via video chat. The league has set a cutoff date for May 1 for any team looking to join ahead of their second season. The league is currently at 11 teams, up from the four original teams that played the 2019-20 inaugural season. League president Mitch Gagne has stated his intent to see a maximum of 12 teams for the start of the 2021-22 season.