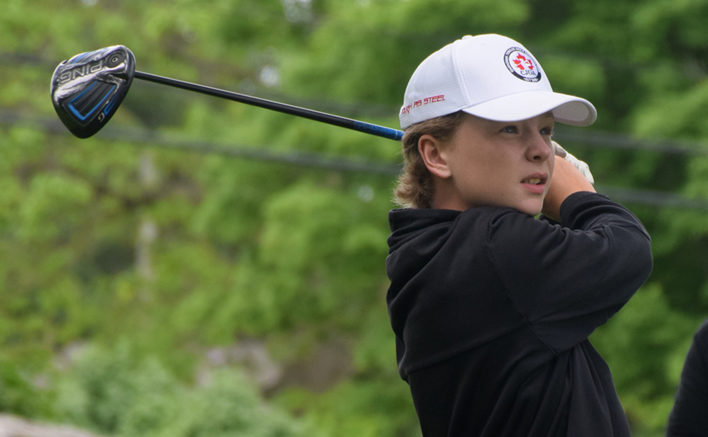 Caden Holmes loaned his talents to the LACGH golf tournament in previous years, offering to drive a ball from the first hole in exchange for a donation. Photo by Adam Prudhomme.

Napanee’s Caden Holmes has been recruited by Texas Southern University golf program, which has offered him a golf scholarship.

The 17-year-old, who is currently finishing Grade 12 at Napanee District Secondary School, accepted the offer and will head to Houston, TX in August to begin preparing for his first year as an STU Tiger. The NCAA Div. I school’s golf season will tee off in late September.

“I liked how south it was, being able to golf year round,” Holmes said of Texas Southern. “And I really liked their program and the direction it’s going to go. I was talking with them quite a bit through the recruiting process, I liked the program and ended up committing to them, they gave me a chance and I’m taking it.”

Holmes caught the attention of U.S. schools in 2018 when he captured the Canadian Ping Match Championship U15 division. He also posted a strong showing at the 2018 American Junior Golf Association/Canadian Junior Golf Association U19 division. The following year he was selected to represent Ontario at the 2019 Williamson Cup in Rochester NY and made the quarter-finals of the 2019 Canadian Junior Match Play Championship in the U19 division.

As with many athletes, 2020 was a challenging one for Holmes trying to find opportunities to play in high-level competitions.

“I haven’t gotten into as many tournaments as I would have liked to but there’s still a few I can get into to and I’m taking advantage of what I can,” said Holmes.

That effort paid off when the Tigers came calling with a scholarship.

Holmes, who grew up playing the Napanee Golf and Country Club, credited his home course for helping him reach this level.

“All the members are nice to me and a lot of people have really helped get my golf game where it is,” he added.