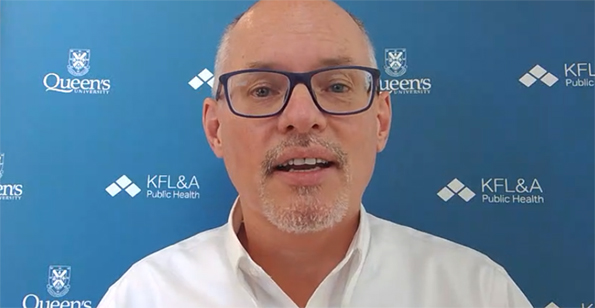 Kingston Frontenac Lennox and Addington’s run as a ‘green’ community on the province’s COVID-19 rating system will likely come to an end tomorrow.

Speaking to media on Thursday afternoon, KFLA Public Health medical officer of health Dr. Kieran Moore says the numbers suggest the region will be moved to a ‘yellow’ protect zone. An announcement is expected sometime Friday.

Restrictions in a protect community include limiting the sale of liquor to between 9 a.m. and 11 p.m., limited volume of music at retail locations and required contact information at customers at some establishments.

“Our numbers are going up within KFLA,” said Moore. “We had 19 new cases today, three have resolved. As a total of active number of cases, we’re at 69. The percentage of our tests that are positive is also increasing to 0.67. The active number of cases per 100,000 is at 4.9. If you’ve been following our counts, we’ve rapidly have accelerated from green to yellow. From a numbers vantage point we are touching or in the orange zone. The context that’s important is that we have not had any impact on the healthcare system as of today. There’s no one admitted into the hospital. There is no one in the intensive care unit, which is great.”

Six of the latest cases were variants of concern.

“We’re anticipating those types of (positive case) numbers every day moving forward,” said Moore. “We’re monitoring the assessment centres, we’re monitoring how many people are actively symptomatic at the assessment centres and there’s been a good correlation to how many are symptomatic and how many are testing positive. That number day in and day out is staying too high for my liking. No question we’ll see more cases. I hope we can limit it and not have it spread to vulnerable members of our community. It’ll be a tough couple of weeks.”

Moore noted 55 of the current 69 cases are linked to an outbreak at Queen’s University, adding the Lennox and Addington as well as Frontenac have done well to limit the spread in those regions of the health unit catchment area. Moore also noted the vast majority of the region followed the rules of the Section 22 Order he issued earlier this month and kept St. Patrick’s Day celebrations to a reasonable level.

“It appears as if St. Patrick’s Day was celebrated quietly and calmly in our community,” said Moore. “It did not attract a large number of people, which was a concern that people would migrate here given that our bars are open.”

He explained his reasoning behind extending the order through the end of April.

“The reason that we’ve done an extension of the order was simply because once you have 69 active cases in the community with a significant number of them being variants of concern, it typically takes two incubation periods for us to be able to get this under control,” said Moore. “The case counts in Ontario today signify that we’re starting a third wave. We’re seeing some increase in hospitalization across the province. The ICU impact is being sustained and the case counts are going up. We have to learn from that in KFLA and hence I have put in the Section 22 Order mainly to keep our social indoor and outdoor contacts to five or less. I don’t want it to inhibit or have an impact on businesses but we know this virus spreads when we let our guard down and have large social gathering. If we can get through these next several weeks we’ll certainly re-visit the implementation of the Section 22 Order.”

The order limits social gatherings to five people indoor or outdoor, limits restaurants to five patrons per table and bans dancing and karaoke. All patrons must remain seated when being served, except for take out.

“Given the current increase of activity in our region I can only ask that you take advantage of the 47 participating pharmacies to be immunized as soon as possible,” said Moore.