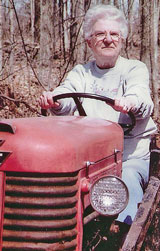 Elvaretta Jean Smith (nee Thomson) of Napanee, ON; formerly of West St Paul, MB and Hamiota, MB; passed away at the John M. Parrott Centre in Napanee, ON on Monday, February 22, 2021 in her 100th year. Born on April 1st, 1921 in Rocanville, SK to Robert A.C. and Margaret Catherine Thomson, Elvaretta was the eldest sister to Helene, Evelyn, Bill, and Verona. In 1930 the family moved to her paternal grandparents’ farm in Hamiota, MB. Elvaretta and her family lived through the Great Depression there, later regaling her family with stories from the time in typical Elvaretta fashion (“We didn’t have it that bad, others had it so much worse.”). Elvaretta loved school and excelled at it, going on to earn her First-Class Teacher’s Certificate in 1940. During the Second World War, she placed her career in education on hold to work in a Canada Packers meat processing factory. Elvaretta met her husband, Alexander A.R. Smith of Prairie Grove, MB; they married in 1945. They settled in West St Paul, MB where they raised son Lauder Robert and daughter Margaret Doreen in the house they built. Elvaretta continued changing lives of young people, teaching elementary school, and later focusing on special education. She earned her Bachelor of Education from the University of Manitoba in 1979. Elvaretta retired from teaching in 1986, and she and Alex enjoyed traveling and spending quality time with their many grandchildren. They lived relatively close to Doreen and her family and enjoyed “wintering” in Ontario with Lauder’s family. Elvaretta and Alex were very active in the Presbyterian Church of Canada community. After Alex died in 1993, Elvaretta continued living in the house they built until 1999, when she moved to Ontario at the age of 78 to be closer to her son and his family. She took great pride in renovating a one room schoolhouse north of Newburgh, ON and was greatly amused that she began teaching in a school just like the one she was living in. Elvaretta loved living down the road from family for the first time in many years. She had always been involved with helping to raise her grandchildren, but she was now helping to raise her great-grandchildren. She was made very happy when Lauder picked her up one Christmas morning with a horse and sleigh. Elvaretta loved Friday Night Dinner, where she would feed a large assortment of her family and continued to travel frequently to Manitoba to visit friends and family. Elvaretta moved from her beloved little home in 2007 but continued to be active within her community and her church from her new home in The Riverine in Napanee. She loved her weekly writing class, where she worked on her memoir. In her last year, Elvaretta moved to The John M. Parrott Centre for more care. Elvaretta will be deeply missed by her sisters, Evelyn and Verona; her children, Lauder (Patricia), and Doreen (Stan) Lundy; too many grandchildren, great-grandchildren, and great-great-grandchildren to list; and her many friends and family members from her communities in Manitoba and Ontario. Elvaretta was beloved and pre-deceased by her parents, Robert A.C and Margaret Catherine Thomson, her sister Helene and her brother Bill, her husband Alex, and her daughter-in-law Shelley. Donations can be made in this special lady’s name to Morningstar Mission in Napanee, or to the Presbyterian Church of the Redeemer in Deseronto.