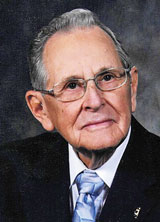 After a long and fulfilling life, William T. Raycraft passed away peacefully at The Riverine on Thursday, February 4. Son of the late William and Madeline Raycraft and brother of the late Hazel O’Connor and Sylvia Lovelock. Husband to the late Rowena (Milligan). Proud father of Gary (Cheryl) Mississauga, Gayle Johnson (Guy) Napanee, and Jane (Jorge) Britannia Beach, B.C. Loving grandfather of Elise (Noe), William, Richard, Meghan-Annie, Madelaine and Gilmour. He will be missed by great grandchildren Noah and Nicholas, plus many other extended family. William’s teenage years were spent on the farm in Morven, but at age 18, he walked across the fields to hitch a ride to Dupont in Kingston, where he was immediately hired. After working at Dupont for 22 years and rising through the ranks to become a day supervisor, when re- structuring hit, he followed some friend’s advice and left to begin a career in real estate in 1971. After 2 years working with Don Hunter, he completed his broker’s license and started Raycraft Real Estate Co. Bill loved working in real estate and had a hand in developing the Napanee Industrial Park. He also developed a subdivision in Morven and another in Napanee. At it’s height, Raycraft R.E. had offices in Napanee, Verona and Northbrook employing upwards of 20 people. During these years, he took an active role in the Kingston & Area R. E. Association serving as President in 1984. Throughout his lifetime he was an active Lion’s Club member, always involved in their community events and beyond. He took on many roles including President, Zone Chair 1965-66, and was awarded a life membership in 1989. He and Rowena traveled to many International Conventions in Canada and the U.S. While leading the local Lion’s Club, he spearheaded their fundraising and support for the establishment of the L & A General Hospital. His support for the hospital never left and his major donation led to the foyer of the hospital being named “The Wm Raycraft and Family Atrium”. William was also involved over his lifetime in supporting his church and community, serving on a wide range of committees at Trinity United and serving 1 term as a town councillor. Although always busy with work and philanthropy, Bill made sure he had time for family & fun. Many happy summers were spent at the cottage on Beaver Lake, which started as 2 small cabins and grew from there. At the age of 40, Bill took up downhill skiing, learning the ropes at the Nacona Ski Hill in Strathcona. He loved to ski and skied mountains from Quebec to B.C. and his favourite, Colorado. He kept skiing into his 70’s. In the 1980’s Bill developed a love for boating and in his cruiser, the ‘Will-Row”, he enjoyed travelling up and down the Trent and Rideau Canals with family and friends. This love of boating led to a move to the Long Reach in Prince Edward County. He renovated the Spanish style house on the water, and loved his lawn, his garden, his neighbours and his boats. Throughout his life he loved to travel and early on found cruises enjoyable, starting with a family cruise in 1963 on the SS United States. He and Rowena enjoyed many more cruises and traveled widely. After her death he finally took a cruise to the Holy Land. In his later years he spent many happy winters at his residence in Zephyr Hills, Florida. His last years were spent at the Riverine where he continued to enjoy life, especially any musical entertainment. Donations in his memory may be made to the Lennox & Addington General Hospital Foundation. A Private family Funeral Service will be held at the Wartman Funeral Home – Napanee Chapel with interment at Morven Cemetery. A public Celebration of Life will be held when conditions permit.

Online condolences and donations at www.wartmanfuneralhomes.com