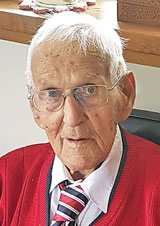 t is with sadness that we announce the passing of Henry Klaver on January 28, 2021 in his 97th year. We do however rejoice and thank the Lord that Henry lived such a full and wonderful life. Henry was born in the Netherlands on July 1, 1924. Henry was the seventh born and last surviving member of his family of 13 children. He immigrated to Canada in 1952 with his cherished wife Gretha and two beautiful children. Henry is predeceased by Gretha and survived by his eight children Elizabeth (Dwight), Virginia (John), Sylvia (Bob), Frances (Bob), Allan (Colleen), Shirley (late David), James (Valerie) and Kenneth. He is also survived by many grandchildren and great grandchildren. In 1952 when Henry and his family arrived in Canada one of the first challenges they faced was that they were unable to speak English. Henry and the family, like many immigrants, persevered with the help of family, neighbours, friends and the Lord. Henry had many careers throughout his full and happy life. He was a photographer, insurance salesman, stone mason, general contractor, dealer of used treasures, farmer and more. There were not many jobs that he couldn’t or wouldn’t do for anyone. Chances are you or someone you know had pictures taken by or work done by Henry and/or his sons. Some of his sons and their children are proudly carrying on the tradition of hard honest work that Henry instilled in everyone that worked with him. In his retirement years, Henry loved to drive the countryside, go to the sales barn and frequent various coffee shops to catch up with friends and acquaintances. Henry trusted in the Lord and never missed an opportunity to tell people to reach out to the Great Creator for guidance. He will always be remembered with great fondness by his children, grandchildren, great grandchildren and his friends and neighbours in Tamworth and area. We take comfort in our belief that Henry is now reunited with Gretha and in God’s care. A service will be held in the future when we can gather again. Interment will take place with Gretha at the Tamworth Cemetery. Memorial donations made to the Memorial Care Foundation of Tamworth (Cunningham Park) would be appreciated by the family. In the care of Hannah Funeral Home, Tamworth 613-379-2997.