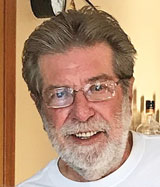 It is with such deep sorrow that we announce Bob’s passing. He is predeceased by his parents Elaine and Albert Taylor and his daughter, Shannon Small. He is survived by his wife Linda, daughters Hayley (Peter Deveau), Jennifer (Steve Woolacott) and Gillian as well as grandchildren Katelyn (Aaron), Justin (Manon), Shailyn, Annika, Alexandra, Mackenzie, Tyjah, Darius, Daylon and Clea, his sister Debra Taylor Roberts and brother Scott Taylor (Ann5). Bob will be missed by his aunts, uncles and cousins and by his many friends and neighbours near and far. Bob spent his early years in Napanee then moved with his parents to Oshawa. He has been retired from Sklar Peppler Furniture for about 15 years after 38 years of service in Toronto and Whitby warehouses as Distribution Manager. Bob retired to the shores of Long Reach in Napanee which he always considered home. He enjoyed his days fishing, boating, attending and hosting neighbourhood parties and family gatherings. He enjoyed winter holidays in some of the warmer states in the US and cruising with friends. Although he has passed his spirit will remain with us all. A family graveside gathering is planned for a later date. Donations in his memory may be made to Ontario SPCA Lennox & Addington Animal Centre, Ontario Federation of Anglers and Hunters, or a charity of your choice.

Online condolences and donations can be made at www.wartmanfuneralhomes.com