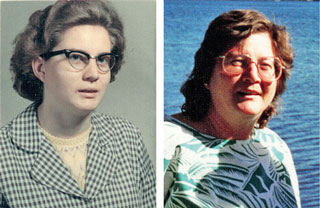 It is with profound sadness that our family announces the loss of our dearest Joan. On Thursday, January 14, 2021, at Providence Care Hospital in Kingston, Joan Clement, passed away at age 71 with her son by her side. Born Joan Sharon Rendell on October 18, 1949 in Napanee ON, she was the first of four children to bless Don and Lena (Boomhower) Rendell. Joan had a love for the open road but never strayed from the Napanee area for long. Napanee was Joan’s home. The small town was a backdrop for her life; It was where she was raised, where she attended school, where she often worked, and where she met the love of her life Richard and where they, after thirteen years of marriage, were blessed with their only child, Nathan. A devoted wife, doting mother, loving sister and cherished aunt, Joan endlessly showed her family that they were the most important thing to her and she continued to share her unshakable devotion and love with them until her final moments in this world. We take solace knowing now that she will be sharing that love with our family already in Heaven. Those that worked with Joan at Celanese, Homesense, or Walmart (where she retired) knew her to be kind, dependable and hard-working. Those who were close with her had the pleasure of experiencing her playful humour and gigantic heart of which she often wore on her sleeve. Joan was preceded in death by her father, Don, her mother, Lena and her brother, Steve (Bonnie). She is survived by her husband of 48 years, Richard, her son, Nathan (Morgan), her brothers Harold (Lynda) and Rick (Sharon), and her nieces and nephews. The family would like to thank her care team at Providence Care Hospital and oncologist Dr Hammad of KGH for their compassion and professionalism during her illness. Donations can be sent in Joan’s memory to The University Hospitals Kingston Foundation with appreciation. A private ceremony will be held on Monday, January 18th, 2021 at Wartman Funeral Home in Napanee, which will be viewable on Zoom and will be followed by a private interment at Newburgh United Church Cemetery.

Online donations and condolences can be made at www.wartmanfuneralhomes.com