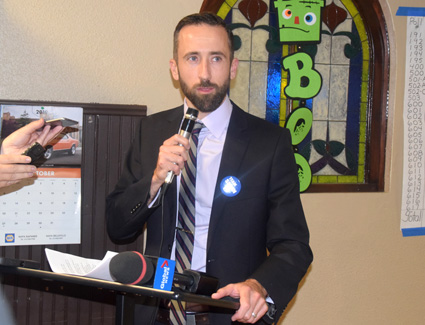 “In accordance with the Reform Act, I have initiated the process to remove Mr. Sloan from the Conservative Party of Canada caucus,” O’Toole said in a statement. “I expect this to be done as quickly as possible. Moreover, as leader of Canada’s Conservatives, I will not allow Mr. Sloan to run as a candidate for our party.”

“Derek Sloan’s acceptance of a donation from a well-known white supremacist is far worse than a gross error of judgement or failure or due diligence.”

In December Sloan, who is currently serving his first term in office, was acclaimed by the Hastings-Lennox and Addington riding to run in the next federal election.

O’Toole’s statement came just over three hours after a story from PressProgress reported a $131 donation was made to Sloan’s 2020 PCP leadership campaign from Paul Fromm, who is regarded as a white supremacist.

Sloan’s office has disavowed the donation, saying it had no idea the donation came from Fromm.

“Today, at approximately 4 p.m. eastern time, I became aware of a Press Progress article that brought to light that Paul Fromm, a person with known connections to racist groups, donated $131 to my campaign. My campaign raised well over $1,300,000 and had over 13,000 separate donations. On any given day we had upwards of hundreds of different donations, and my team, which was run in many cases by volunteers, processed cheques and other things. At no time was I ever aware of this donation. Paul Fromm is a notorious name to some, but not to everyone, and clearly this name, mixed as it was in the midst of thousands of other donations, did not ring any bells to my team. Upon learning about what happened, I immediately contacted the Executive Director of the Conservative Party, Janet Dorey, and requested this donation be returned.”

“The party processed the donations to all the leadership campaigns,” said Martin. “Someone donated to Derek and he was an unsavoury individual. We in no way, shape or form condone (Fromm’s beliefs), we would completely disavow that person and their beliefs.”

Martin said Sloan’s staff was looking into how to rescind the donation once it became aware of it.

“We in no way shape or form condone that sort of extremist individual,” Martin said of Fromm. “We don’t want that connection made to his leadership campaign or the Conservative party, full stop. There’s going to be people who want to make that connection, I think it’s a little unfair. Any Canadian can donate to any political campaign.”

Sloan’s fate within the party now rests on a vote from his fellow members of the caucus. An MP can only be removed from the caucus through a majority vote of its members. A vote could happen as early as this week.