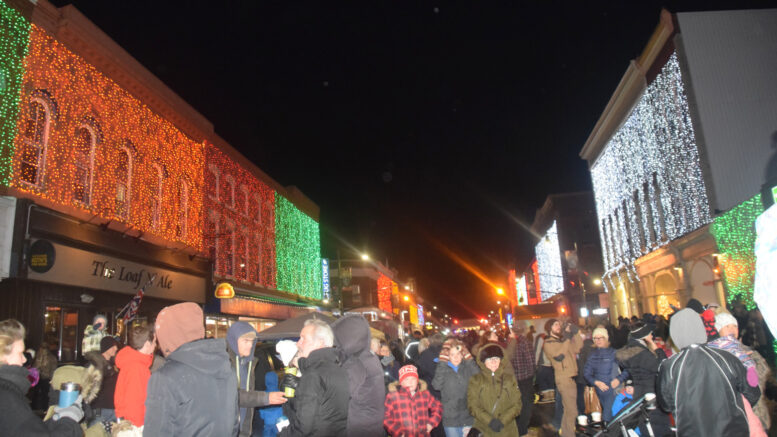 Previous Big bright Light launch parties have drawn huge crowds to the downtown core. This year's will be much more subdued with the switch being flipped on Nov. 12 with no large crowd in attendance. File photo.

Instead of a major event with live music and Santa himself, the lights are scheduled to illuminate for the first time this season on Nov. 12 without fanfare. The Downtown Napanee BIA has intentionally kept the exact time of the switch flip quiet so as not to encourage a large crowd.

That doesn’t mean there won’t be any holiday cheer this yuletide season. Rather than one night to celebrate the launch of the Bright Lights, the BIA has planned several holly-jolly-themed events that will be held over the next few weeks.

“We are going to have a special message from Santa who is going to let everybody know that they’re turned on,” Downtown Napanee BIA operations manager Krystal Snyder explains. “We do have a couple of smaller initiatives that we’re going to be doing. We have Where Is Merry Mayor Marg, which is kind of like a Where’s Waldo scavenger hunt that we’re running over the course of a month. As people come downtown if they find her photo (inside a downtown shop) in a Santa hat, they can submit it to a contest that we’re going be running to have a prize.”

Local merchants will display a photo of mayor Isbester from Dec. 3-20.

“We’re also doing a cookie crawl and participants are going to be able to purchase a box and different locations are going to have cookies and they’ll be able to go there and pick up cookies,” said Snyder. “The money from that is all going to go to the Food Bank.”

Stores will be offering cookies that reflect their business and will be encouraged to hold a special promotion on Dec. 2.

The shopping event will run on Dec. 4 and stores will again be encouraged to offer special promotions, such as discounts in exchange for food bank donations. Participating stores will also hang a festive bow on their door to let shoppers know they are taking part.

“Our biggest thing was to keep everyone as safe as possible while still committing to cheer and warmth being brought to the downtown area,” said Snyder. “We wanted to make sure the downtown was going to be somewhere that people would want to come and walk downtown and see all the wonderful things that are there. We have been in touch with the Health Unit and they know what we’re planning and have made sure everything we’re planning is within code and guidelines.”

The BIA is also in the process of sourcing several Christmas trees to line Dundas Street to further add to the festive spirit. Stores will soon be decorating their windows and will have a chance to win a prize for the best display.

Fortunately for the BIA, the outdoor Bright Lights are already well suited for the pandemic. From there it just meant adding a few tweaks to the main event to create an event that could still succeed in 2020. It also meant going from just one main event to a handful of attractions spread out over November and December.

“We’re playing off a lot of stuff that we would already have and just trying to find these smaller initiatives that we can do while keeping everybody safe at the same time,” added Snyder.