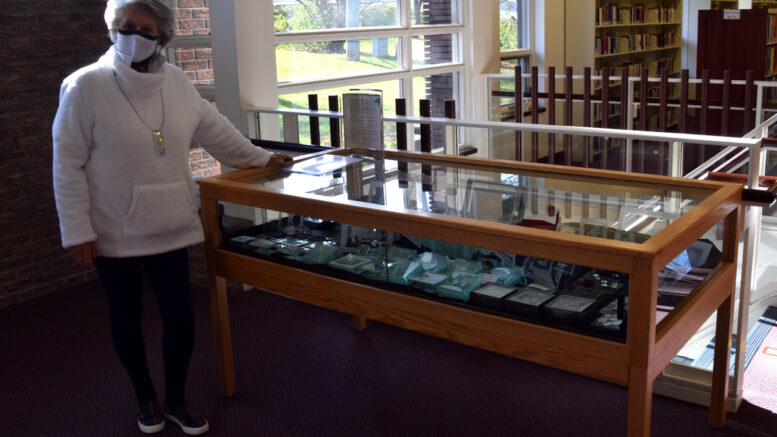 C.A. Cavers, who specializes in artwork made of glass, stands next to a display case of some of her work at the Napanee Branch of the Lennox and Addington Library. Photo by Adam Prudhomme.

On the second floor of the Napanee branch of the Lennox and Addington Library resides a display that showcases the work of perhaps one of the best-unknown local artists, C.A. Cavers.

Though her work may not be too well known in the community, that could change thanks to the ongoing display. Running through Dec. 17, the library display will carry a small sample of the many glasswork designs she’s created over the years.
Cavers has been honing her craft since 1984. It was around that time she left the corporate world to make a go of her self taught hobby. Since then her clients have included Olympians, fashion designers, members of the Toronto Blue Jays, singer Jann Arden, four U.S. Ambassadors, African presidents and European royalty.

“There’s etching and then there’s carving glass and I do both, but my preference is to do carving because then you get the 3-D effect,” Cavers said of her work. “When I carve the first layer I have to make sure that’s where I want it because when I take the resister, let’s say it’s vinyl, off for the next layer, I can’t go back. There’s no room for error because it isn’t like paint where you can just paint over it. That doesn’t happen.”

“It takes a lot of thought,” Cavers said of creating a layered image. “In golf I’ve done a hole-in-one where you stack them and you get a hole-in-one. You put the tee on the glass, you put the ball on the tee and then shoot for the pin.” 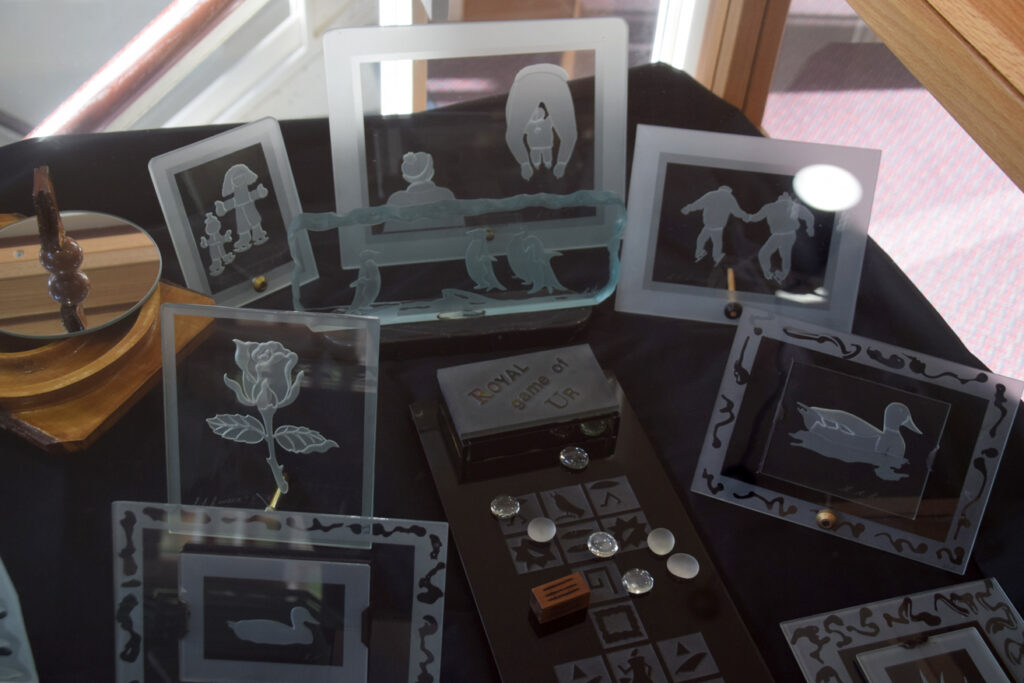 Few artists do what she does, which meant she had to learn by trial and error when she first launched her business.

“I worked in the corporate world for 16 years,” she recalled. “I got so tired of getting awards that were awful. Half of them wouldn’t even make it to my dresser drawer and I said that’s a waste of corporate dollars. When I left (to start her glass carving business) the first client I went to were the clients I had at my former job at the Canadian Imperial Bank of Commerce. I went to those people saying here’s what I’m doing, here’s why I’m doing it and then said what do you think?”

From there word of mouth of her art spread and she went beyond creating awards for corporate functions to creating one-of-kind artwork for a wide range of athletes, musicians and world leaders.

Her second career has always been an interesting one. She recalls one time the challenge of creating a design for a U.S. Ambassador to Canada.

“I was running late on one set so I said I’m not going to get there on time, just give them something else, what did you used to give them? Just give them that,” she recalled. “They said ‘no, no we want (your creation).’ They said ‘how about I sent a car?’ That’s exactly what they did.”

Knowing she wouldn’t have time to make it Toronto for the start of the dinner, she suggested meeting the representative from the government at a truck stop halfway along the 401.

“I don’t even know who I’m meeting, what they’re driving, what they look like,” she said. “I go in and there’s the only black limo with red government plates.”

Naturally, that was the car she was supposed to meet.

Now semi-retired, she has lived in Napanee for the last three years where she continues to take custom corporate and residential orders.

“I think some people will be quite surprised to see what I’ve really done,” Cavers said of her Napanee neighbours. “I don’t really talk about it too much. Some people may know that I’m in the arts and that I do art and they assume that I do painting. I can do some painting but I can’t say painting is my strong suit at all.”

Because of COVID-19, there was no formal opening of the exhibit. She welcomes feedback to her work at glass2ca@yahoo.ca.