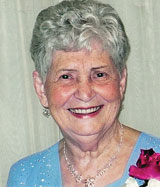 Passed away peacefully at the John M. Parrot Centre on October 31, 2020 at the age of 86. Fondly remembered by her son Roger, daughter in law Linda, and granddaughter Amber (Liam). Helen was predeceased by her loving husband Ray (2005), daughter Barbara, and son Bradley. Survived by her youngest sister Judy (Wilson) Maracle and sister in law Reta Jackson. Predeceased by brothers Dan Jackson (Dorothy) and Bernard (Bud) Jackson, sisters Bette Gourlie (Keith) and Luella Adams (Baden). She will be missed by many nieces and nephews. Helen like many others from her generation lived by work first and play later mentality, and that she did! She worked at H.D. Lee jean factory through the 70’s until it’s closure in the 80’s, then worked at Barmish Clothing Factory until her husbands health called her home. After retiring she and Ray moved from Selby to Napanee. “Little” Helen joined the Blue Iris Line Dancers, and a community walking group through Seniors Outreach Services. She enjoyed ballroom dancing with the Old Time Fiddlers, and the Belleville 39 Club. She touched many people with her pleasant demeanour, honesty, and warm smile. Visitation will be held at the Wartman Funeral Home, 448 Camden Road, Napanee, on Thursday, November 5th, 2020 from 11 am – 1 p.m. followed by a service in the Chapel. Please RSVP by email at wartmanfuneralhome@sympatico.ca or by calling 613-354-3722. Donation in Helens memory can be made to the Heart and Stroke Foundation or to the Alzheimers Society of Canada.