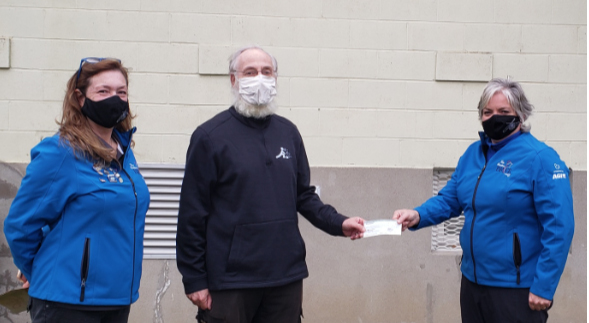 Pam Jordan and Ian Munro (left) of GKC present a $15,000 cheque to Napanee and District Curling Club president Heather Ramshaw outside the Napanee club on Oct. 29. The money was the local club’s share of money raised during the Tim Horton’s Brier, which was held in Kingston earlier this year. Members of the Napanee club were among the volunteers to help run the event. Submitted photo.

Curlers from the NDCC were some of the volunteers who helped to stage the Brier, which was held Feb. 29-March 8 at the Leon’s Centre. Newfoundland’s Brad Gushue captured the title.

As part of the Brier hosting agreement, Curling Canada shares proceeds from the event with host committees, which in this case included Greater Kingston Curling (GKC). The GKC is an association of the five area curling clubs, including NDCC. The GKC’s mandate is to promote the sport of curling in the area.

GKC determined that its portion of the Brier proceeds should be shared with its member clubs since many of the hundreds of volunteers who worked so hard to make the event such a success were members of the five area curling clubs.

Pam Jordan and Ian Munro of GKC presented the cheque to Heather Ramshaw, president of the NDCC on Oct. 29.

“These Brier proceeds come to our member clubs at a critical moment given that the pandemic is having a serious impact on the feasibility of curling clubs reopening,” Linda Lott, president of GKC stated. “In the case of NDCC, we are so sorry to learn it will not be opening this season as a result of the pandemic. We hope these Brier proceeds will ensure that the club remains financially healthy so it can fully reopen in 2021.”

Ramshaw thanked all the volunteers from the local curling club and the many supporters who made this event a success.

“NDCC is pleased to receive these funds from GKC,” said Ramshaw. “The club executive is devoting all its efforts to managing finances to guarantee our ability to have a successful re-opening in the fall of 2021 and these funds will certainly help.”