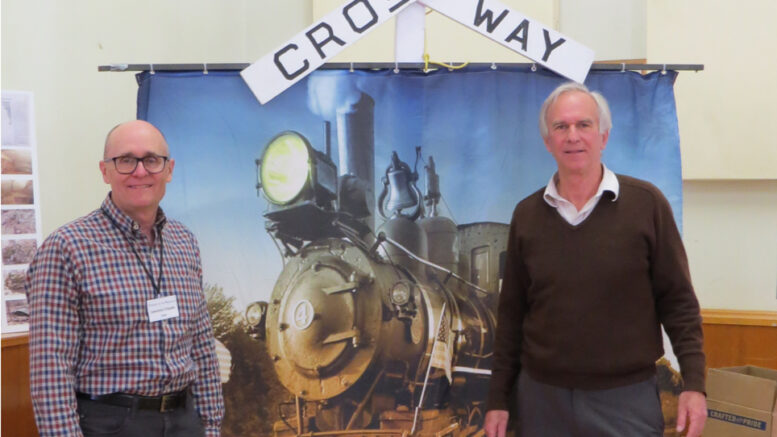 Long before the car, railways and canoes were the highways of the region.

And long before now, many of those railways ceased to be operational. Documenting the history of these former passageways in all their resplendent beauty is historian, photographer and all around explorer Steve Manders in his new collection of books.

Manders’ series documents places as far flung as the Rideau Canal and, closer to home, the Napanee River. He has also written about the early railways, tramways and roads of eastern Ontario, the Salmon River, Mazinaw Lake, the Napanee Mills Cement Works Ltd., and the Canadian Portland Cement Co.

What started as a passion project for Manders evolved into a means by which to document places either disappearing or already having disappeared from recent memory.

In speaking with the local author, Manders noted he has been travelling and documenting these places for about 10 years. After having uploaded them online only to have them be erased, he decided the best medium to convey his travels into perpetuity would be book form.

“This started off with five years of paddling and exploring and studying, then I was posting all my pics and stories on Google Earth to share with the world. Then, I started tracing old railways around the countryside and tracked down 62 ghost railways in Eastern Ontario,” explained Manders.

Manders noted he compiled 6,200 photographs over the years. Then, those online photos got deleted.

“I’d put a lot of good work and research into that and they say nothing is ever forgotten on the internet, but when it’s under someone else’s control, they can delete,” he said.

After he decided on writing his series, Manders described the legwork involved in getting accurate information, from visiting the archives to knocking on stranger’s doors.

“I had gone to the archives, I’d knocked on doors-whatever it took to figure it out-I needed a way to preserve this history and books were the way to do it,” stated Manders. “You won’t find all that information in any one tidy source about our local railways, roads, logging routes and historic canoe routes all under one cover.”

In order to take his photographs, Manders noted he’s paddled all the rivers that span his books, from the Moira to the Madawaska.

“Nobody can get these photos unless you’re a keen paddler,” he said. “And, nobody else will do it in the dead of winter or hike in the winter when the rivers are dried out.”

Apart from his books, Manders shares pieces of the past through his portable museum.

“I have a portable museum I take around with a lot of photographs and artifacts,” he said. “I get dressed like a railway conductor and I have a big mural of an old steam engine pulling into my station. I have a lot of fun with it.”

“I have a huge collection of topographical maps as well, so we can see how different rivers and roads have evolved over time,” said Manders.

In summation, the author spoke to the breadth of his research and the depth of content found within his series.

“These books are photo tours of the Napanee River, Salmon River, Rideau Canal-from end to end, side to side and in all seasons with some historical, old photos,” explained the author. “Most people have a cottage somewhere, they’ll know about a mile of their shoreline but know nothing about where the river originated. I’m gonna take you to the very first puddles where the river originates and follow it right down to Lake Ontario.”