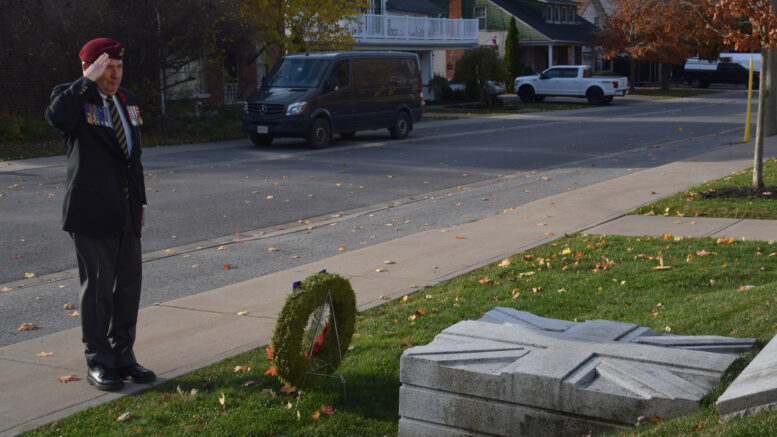 Jack Magilton of Napanee Legion Branch 137 salutes a wreath at the Lennox and Addington cenotaph ahead of next week's Remembrance Day services. Photo by Adam Prudhomme.

Remembrance Day ceremonies across Lennox and Addington will operate much differently this year, as spectators are encouraged to watch from home.

In an effort to reduce the spread of COVID-19, small events will be held at cenotaphs located in Greater Napanee and Wilton, by invite only and closed to the general public. Instead they will be streamed online-Napanee’s will appear on the MyFM Facebook page at 11 a.m. while Wilton’s will be shown on Loyalist Township’s Youtube, Facebook and Twitter accounts starting at 10:45 a.m.

“We will have a small service and we are asking that the public not attend,” Napanee Legion Poppy Campaign chair Peggy Sunstrum said in a video released by the Town of Greater Napanee. “MyFM will be live streaming so you can watch it at home or please watch the one from Ottawa, it’s always a beautiful service.”

The national ceremony also be live streamed by searching The National Remembrance Day Ceremony-Facebook Live and is scheduled to begin at 10:45 a.m.

This year’s national service will have a special focus on the 75th anniversary of WWII and will include a flyover from three heritage planes-a Douglas C-47, a Dakota C-47 and a North American Harvard-which played a huge role in the Royal Canadian Air Force’s efforts in the Second World War.

Though there will be no parade or large public gatherings, some things remain the same. Canadians are still encouraged to don a poppy on their lapel from now until Nov. 11. Poppies are available at businesses throughout the region. Napanee’s Beer Store and Metro will also have volunteers on hand selling poppies.

“Please be generous in your donation to wear your poppy and wear it with pride,” added Sunstrum.

Donations collected during the Poppy Campaign directly support veterans and their families, but are also used to give back to the community as well.

According to the Canadian Legion, the history of the poppy as a symbol of remembrance goes back to the Napoleonic Wars. Records show the flowers grew in abundance over the graves of soldiers in Flanders, France. The red flowers’ symbolism with Canada was solidified when Lt. Col John McCrae penned the now famous poem In Flanders Field while he was serving in WWI.