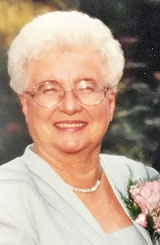 Evelyn Davis (Hill), 87, of Napanee, passed away peacefully on September 17, 2020 at the John M Parrott Center. She was born to the late Walter and Marjorie Hill, October 7, 1932, in Merlin, Ontario. She married the late Ron Davis in 1961 and lived most of her life at St. Pauls Ontario before Evelyn relocated to Napanee in 2015 to be closer to her children. Evelyn is survived by her four children: Wayne Davis (Carmen), of Foster, QC; Eric Davis (Jane) of Napanee, ON., Mark Davis (Shari), Napanee, ON; and Diane Schoening (Danny), of Allen, TX and her sister Elaine (Jim) of Richmond Hill ON. She will be sadly missed by her eight grandchildren and four great-grandchildren. Evelyn was predeceased by her loving husband in 2004 and her brother Jack. Evelyn was proud of her family and leaves behind nothing but beautiful memories. In recent months her health declined, and we are forever grateful to her friends and staff at the John M. Parrott Center who cared for and kept her safe throughout these challenging times. Rest in Peace. The family requests that people make donations in support of a charity of their choice in lieu of sending flowers. A celebration of Life with be held at a later date (TBA).