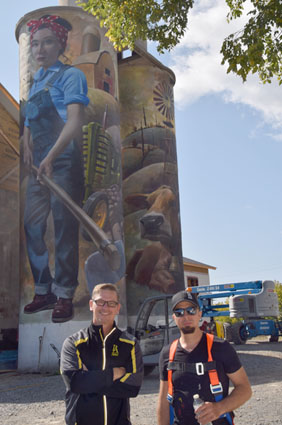 L&A Mutual Insurance president Mike Salmon stands next to artists Shane Goudreau, who painted a large mural on the silos behind the future site of L&A Mutual, located on East Street in Napanee. Photo by Adam Prudhomme.

Using the former Country Depot silos as his canvas, artist Shane Goudreau has created an eye-catching mural overlooking downtown Greater Napanee that harkens back to the region’s rural roots.

Central to the farm scene is an approximately 90-foot tall farmer known as Annie. Wearing blue coveralls and a rolled up sleeves, she’s seen hard at work, tending to crops with a tractor, barn, cow and rooster in the background. 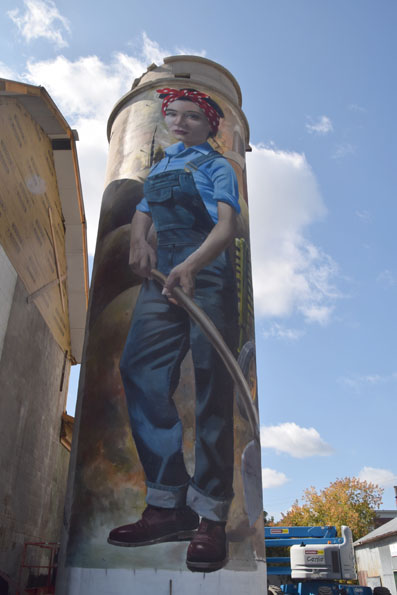 The farmer that looms over downtown Napanee has been dubbed Annie. Photo by Adam Prudhomme.

The work was commissioned by Mike Salmon, president of L&A Mutual Insurance Company. The outdoor artwork is part of the full-scale renovation that is currently going on at 76 East St., which will be the future home of L&A Mutual.

“I targeted Shane because of some of the work he’s done in the past in and around Kingston and the Napanee area,” said Salmon. “We felt that his work matched the spirit of what we were trying to do with our restoration here.”

Salmon said he was purposely vague when he gave Goudreau an outline for what he was looking for in a mural.

“I certainly didn’t try to impose on the artist,” said Salmon. “You never do that, that’s just a losing formula. Shane’s ability to communicate historical images was really resonated with me. So on the agricultural aspect of it I did ask for one specific item, which was a female farmer which was a tribute to the women who helped keep the lights on around Napanee and the surrounding communities historically through WWI and the Great Depression and WWII. The role of women has really been undervalued historically in our view. That is a tribute to all the women who have helped us over the years.” 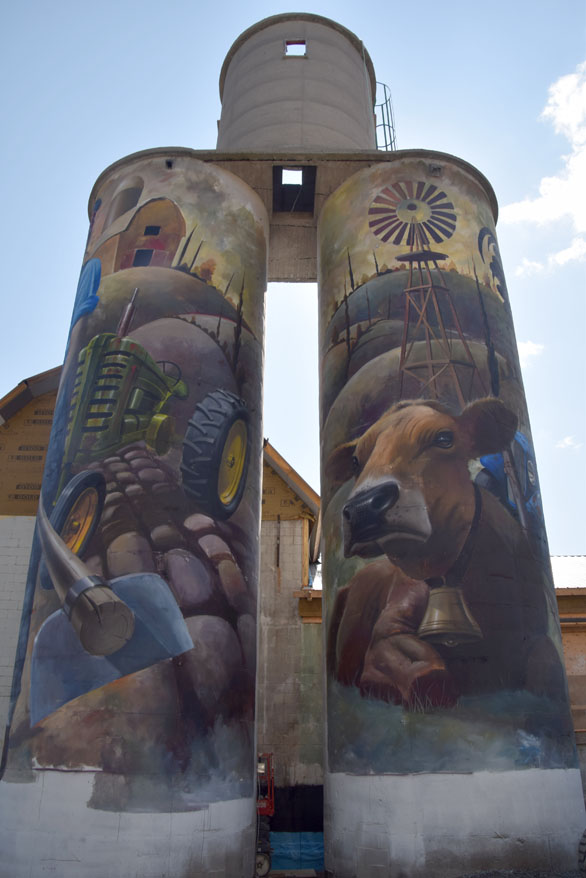 After that Salmon said he gave Goudreau plenty of artistic license to create what he felt best reflected the agricultural theme.

Work began about three weeks ago and on Wednesday afternoon Goudreau was putting the final touches on his creation.

“I’ve never done a silo before but I’ve done projects like a silo that have a rounded surface, I’ve actually painted a plane before and walls that kind of dip and have different sort of arches,” said Goudreau, whose work can be found on walls throughout the Kingston area. He specializes in airbrush and hand-painted acrylic. “I’m always working with not normal, not flat surfaces and you kind of have to work your art work around corners.”

The former Napanee Raider turned self-taught artist was pleased with how the farm scene turned out. He’s not the only one as Annie has already attracted several visitors who have been checking on the progress of the mural over the last few weeks. She’s also garnered a fair bit of attention on social media.

“Everything came together the way that I wanted in a way that gave it that proper grit and character that it needed,” added Goudreau. “It’s a bit reminiscent of what you might see on an old master style painting where you have that tone or pallet but at the same time it’s got something that I add through my experiences as an artist to create something different.” 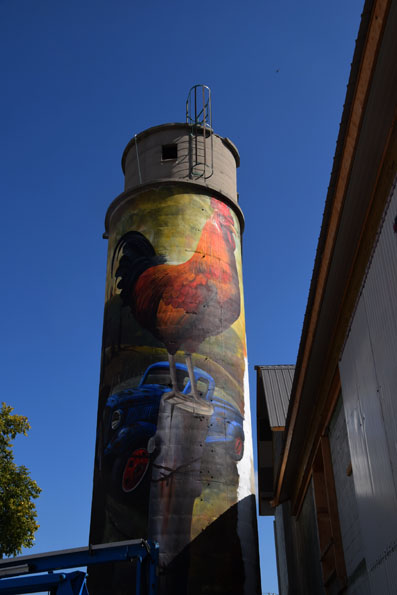 Salmon said working with a local artist was important as they’ve enlisted local contractors to do the inside restoration as well.

Though the work on the silos is just about complete, Goudreau still has more to do at that location.

“He’s not done yet,” said Salmon. “He’s got another stage of this project and as a little teaser, Shane’s going to be doing a lot of the interior work in the building as well. His artwork is going to be transcending through the entire project and we’re excited about that.”

More examples of his work can be found on his Instagram page @Goudcreated.

Salmon says renovations on the actual building have been moving along as planned and barring any unforeseen setbacks, they’re on target to be in the new building by St. Patrick’s Day, 2021.