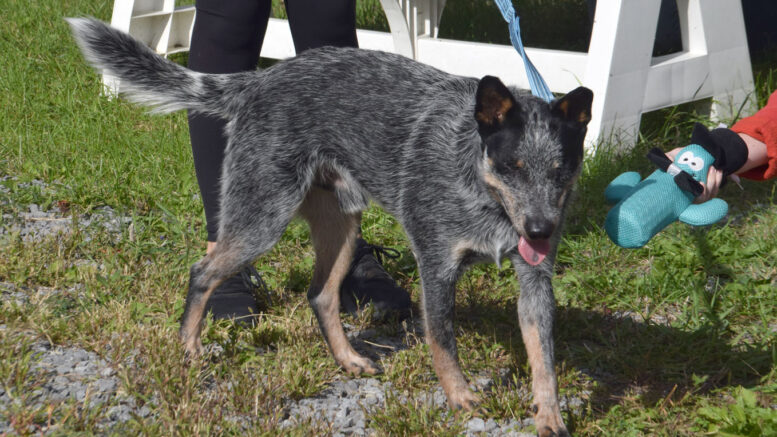 Duke, a one-year-old Blue Heeler, required surgery to remove both his eyes when he was surrendered to the Lennox and Addington OSPCA. On Thursday he was successfully adopted to a new family. Photo by Adam Prudhomme.

Duke, a blind Blue Heeler dog who has was up for adoption at the Lennox and Addington OSPCA, has been sent to a farm.

That’s not a metaphor meant to disguise a sad outcome-in fact Duke’s story is very much a happy one. The one-year old pup has found a forever home with a family from the Belleville area, where he’ll have 76 acres of fenced in land and trails to play.

“We actually had a born blind dog for 13 years,” said Michelle, who along with her husband Rob and two daughters Jordyn and Jaime, was at the Lennox and Addington Animal Centre Thursday to officially pick up Duke and bring him home. “They’re a normal dog, you just need to watch out for them a little more. They’re just like any other dog.”

Despite his condition, Duke is extremely friendly and enjoys meeting new friends. As soon as he hears a new voice, he’s excited to greet them.

“We’ve got a two year old female dog that loves other dogs, so we’re hoping that they’ll be best buddies,” added Michelle.

Duke first made the news a few weeks ago when he first arrived in Napanee and the local centre went to work trying to find him a good home. “Duke was surrendered to us several weeks ago, his family was no longer able to care for his special needs,” said Esther McCutcheon, manager of the L&A Animal Centre. “When he came into us he was blind at that point. The eyes themselves were causing him some discomfort so we removed his eyes so he would have a pain free life wherever he went. He’s just a special boy, a lot of times we get dogs in and it can be kind of scary (for the dogs), new place, new people. The day he came in, I was here that day, he just had a smile on his face, which is not totally common. Usually they’re a little scared of us at first. Just right away he was just the sweetest little angel.”

Staff at the animal centre aren’t exactly sure what caused Duke to go blind.

“We talked to a couple different vets about that,” said McCutcheon. “There was no consensus reached. They think that it was a progressive genetic problem. He may have been born completely blind, or just partially blind but it did get worse over time.”

Along with being blind, Duke is considered small for his breed. Other than that, he’s a completely healthy boy who has found a family that is willing to put in the extra care a dog like him will need.

McCutcheon says she was pleased to see the amount of interest a dog like him was able to generate in the community.

“We had a lot of people apply (to adopt Duke),” she said. “I want everyone to know how much we appreciate all the applications, even if we weren’t able to get back to them, maybe it wasn’t exactly the right fit for him but we get new dogs all the time. All those people that applied for him I would say don’t give up.”

For a list of all animals currently looking for a home, visit www.ontariospca.ca/lennoxaddington/.