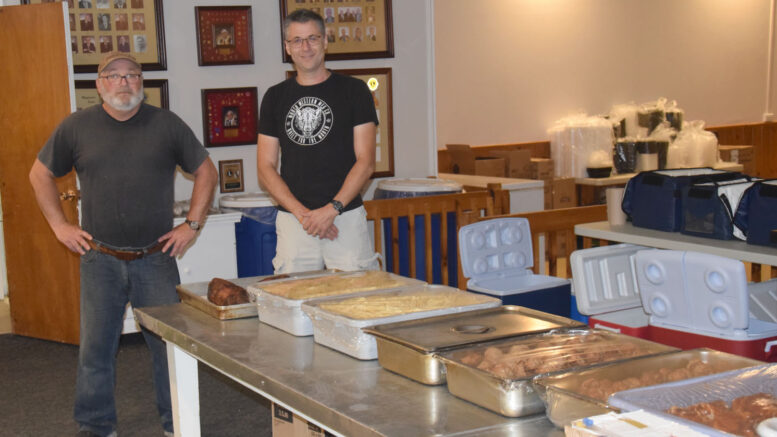 Morningstar Mission volunteer chef Larry Wilson and Morningstar Mission executive director Kevin Alkenbrack put together meals that will be delivered to those in need across the community from the Napanee Lion's Hall. Photo by Adam Prudhomme.

When demand for Morningstar Mission’s meal program tripled in the wake of COVID-19, local volunteers stepped up to answer the call.

Working from the kitchen at the Napanee Lions Hall, a dedicated team of cooks and delivery drivers are now producing 900 meals per week for those in need.

“Kevin (Alkenbrack, executive director at Morningstar Mission) puts out notices and the volunteers just come from everywhere,” said Larry Wilson, a volunteer cook with the Mission. “We’re still an established team from two years ago. There’s the volunteers that come in, the cooking team, the package team, it’s just a different world with COVID. Because of that we don’t work together as much as we did at the old Mission, and we really miss that. We miss seeing the community, hopefully that works its way back into what we’re doing soon.”

The cramped quarters at the Mission’s primary location on Water Street made it unsafe to use during the height of COVID-19. The kitchen is also undergoing a major renovation that won’t be completed until the end of the year. That meant the Mission had to shift its operation to the Lion’s Hall where volunteers begin their day as early as 5 a.m., prepping meals that will be delivered across Lennox and Addington County.

“We’re trying to judge as the numbers keep going up what is the proper amount,” said Wilson on some of the challenges they’ve had to face. “Back at the Mission we would know this takes so much of this vegetable or this needs so much of this roast. Now that the numbers (of clients accessing their services) are going up and we’re cooking for such a larger segment of the population, it’s just judging the quantity of food. The quality I think is still really top notch, but the quantity is a juggling act.”

The volunteers have gotten creative to find ways to stretch their food rations to feed more people, without sacrificing the actual content of the meal.

They’ve also had to adjust how they distribute their food as well, staggering the volunteers to ensure there’s fewer people in the hall at any given time.

While they continue to provide nourishing food for the body, COVID-19 has forced them to have to cancel their community dinners that were good for the soul, at least for the time being.

“For some of our clients, they’ve really lost that social connection,” said Alkenbrack. “Formerly they could go and sit on the couches and visit at Peer 17, they could come early to Morningstar and visit and have a meal, break bread together. And now everything is really rushed, take your meal and go. We’re six months in and people that have so many challenges socially, emotionally, still are being discouraged from building community. So how do we be part of the solution for that, that’s going to be the challenge in the middle of COVID.”

The rising number of people who need help during this time is expected to rise as winter comes as well, which means yet another challenge for the relief mission.

“The challenge will be what will our numbers look like, how will we be able to distribute to people?” said Alkenbrack. “We’re starting to talk now about doubling things, instead of having daily pick up, maybe have three times. Instead of delivering daily, deliver three times and we deliver double the meals each time and that eliminates the chances of it being raining, snowing or cold. To me those are going to be the large challenges.”

For the time being, thanks to the dedication of their volunteers, they’re able to meet the increase in demand.

“Right now we have sort of planned for 900 meals a week, which is where we are right now,” said Alkenbrack. “We’re still seeing our numbers grow. We don’t know economically who is going to feel the pinch of the downturn. At this point we are ok, we always targeted 900 meals a week. If it goes to 1,400 a week, it puts a challenge on our cooks and our delivery and financially.”

Despite the added stress, Wilson says he still enjoys what he does.

“It’s still a pleasure to be doing this,” said Wilson. “It’s nice to do something and when you finish your day you feel good about what you’ve done.”