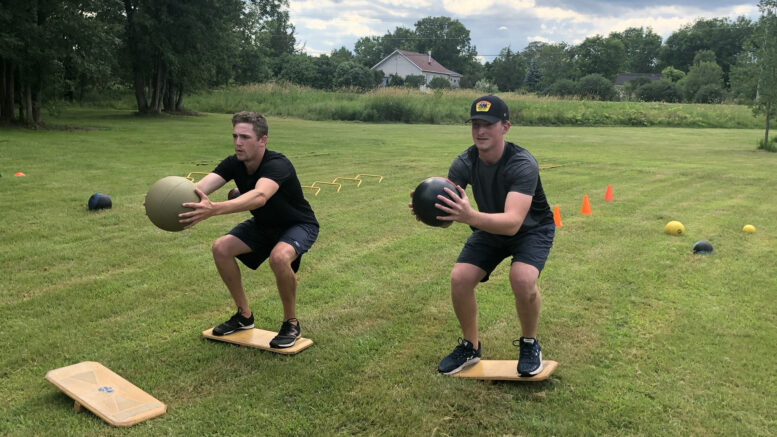 Nelson Powers and Brendan Hagerman work out at Lisa Myles' outdoor facility known as No Challenge No Change. Submitted photo.

When one door closed for fitness trainer Lisa Myles, she decided she wasn’t going to wait for another door to open-she’d simply set up shop outside.

That’s exactly what she did when the gym she was working at closed due to COVID-19 protocols, creating her own outdoor gym in her North Shore of Hay Bay backyard known as No Challenge No Change.

Previously she had worked at Napanee’s Fit4Life, which closed its doors in March as part of Ontario’s state of emergency orders. While other gyms were able to reopen as part of Ontario’s Phase 3 last month, Fit4Life owners Natalie Locke-Wilson and Steve Wilson decided not to risk it, as their gym was located in the Lenadco building, which currently serves as this region’s COVID-19 screening centre.

“They just couldn’t go with what the protocols were,” said Myles. “It was just too much for them. It was sad, but sometimes there’s a reason for things. I know that they’ll do well, Natalie and Steve, they got lots of other things on the go.”

After a quick brainstorm, Myles decided she would open a gym of her own known as No Challenge, No Change, which she operates outdoors in her home.

“You get better airflow,” Myles said of working out in nature. “I don’t want to be in a gym. I had no intentions of really going back to a gym right now, just because we’re pretty aware of how this spreads and being in a gym and not having to wear masks and they’re saying when you’re with a client you didn’t have to have distance because you’re working with that client. I’m thinking that person’s exerting themselves, where are those droplets going? And its kind of cool being at home, I don’t have to travel as much.”

Her expertise is working with young athletes in a variety of sports, specializing in dry land training.

“More so the younger kids, I basically build a base with them, usually I work with kids about 10 to 17 or 18 until they go to university,” she said of the majority of her clients. “You see them for a long time, they’re like family essentially. I have some personal training clients that I’ve had for 15 years.”

She offers group classes, personal training and dry land training for hockey players, the latter of which she was among the first to offer in this region.

She plans to operate the outdoor facility through October, provided the weather cooperates. She can be found on Facebook by searching No Challenge No Change.