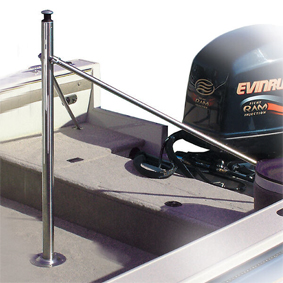 Police warn boaters that a ski bar should only be used to pull someone on water skis. Photo by OPP.

The Ontario Provincial Police (OPP) Snowmobile, Vessel, ATV, Enforcement team (SAVE) wants to increase safety and enjoyment of towing sports, reminding boaters to use the proper equipment when pulling a person in a tube behind their vessel.

In 2007, a seven-year-old girl was fatally struck by a ski bar pulling a tube. Investigation revealed that ski bars are only designed to pull a water skier.  They are not designed to pull tubes and other water toys. The risk is that the tube will fail causing it to snap off. The tube can then become a deadly projectile causing serious injury or death to anyone in its path

Following the media release in 2007 of this incident several people had brought bent ski bars and bolts to the Peterborough detachment lending further evidence to the investigation and also showing just how lucky they had been not having any serious incidents.

This summer with many more people being on the water with older boats. The OPP marine units have seen ski bars being used to pull people on tubes. During our vessel safety checks we use the story about this incident to educate them. However the message is not getting to a wide enough audience.

And finally a reminder…your lifejacket only works if you’re wearing it.