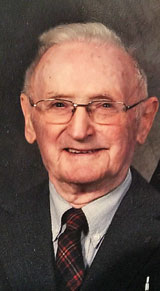 Bill Clark, the Physiotherapist at the Lennox & Addington County General Hospital for the first twenty years of its existence, died recently. He passed away on the morning of Thursday, July 16th after a week-long stay in Hospital. He was 98, and had been suffering from severe dementia for a number of years. Bill was born January 3rd, 1922 on Broadholm St. In Possil Park, Glasgow. It wasn’t the best neighbourhood, but it wasn’t the worst. Lower middle-class. After leaving school he apprenticed as an engineer on the railroad, where his own dad worked. In 1946, at the age of 24, he made the controversial decision to become a Physiotherapist. Then, as now, it was a profession dominated by women. While training at Stobhill Hospital, at 1250 beds the largest in postwar Europe, he met a beautiful young auburn-haired nurse-in-training, Rose Furie. They married in 1951 and had Janice in 1953, David in 1956. Moving to the West Coast resort town of Oban, Bill worked at Dalentart Hospital, made home visits to private patients–without a car–and built a house, largely single-handed. It would become a habit. It was “Roseliam” on Polvinister Rd and they ran it as a Bed & Breakfast. With no vacancies ever they paid off their 20-year mortgage in 8 and decided to move to Canada. That happened in February of 1964. First came three years in a small town in Saskatchewan, then in 1967, the move to Ontario and Napanee. He built another house, again largely by himself, this time on River Road. Bill and Rose Clark were fixtures at the new hospital until they retired in 1986. Bill ran the Physio Department by himself with no secretary, meticulously writing all his patient notes by hand. The recommended maximum number of patients to see in a day was fourteen. One day he saw forty-two. When he retired it took three new young physios to replace him. After retiring, Bill and Rose were extremely active in the former Seniors Outreach Service, being named Volunteers of the year several times. Bill is pre-deceased by Rose, who passed away in May of 2020 at the age of 92. He is survived by his daughter Janice and son David, granddaughter Amy (Gerardo), grandson Adam (Leslie), grandson Ian (Sabrina), granddaughter Alicia and great-grandchildren Leonardo, Martha and William. Special thanks to Bill’s caregivers near the end: Dr Aaron McGregor, Nurse Corisa and numerous PSWs from various agencies, and private PSW Sue Lomonte. A service is being held Wednesday July 22nd at 2 PM at the Wartman Funeral Home in Napanee. COVID restrictions have been loosened somewhat and fifty people will be allowed. Hopefully it will not be too much longer until we can plan a public Celebration of Life for both Bill and Rose, at a time when COVID is finally over and Janice can cross the border once again to attend.

Online condolences and donations can be made at www.wartmanfuneralhomes.com