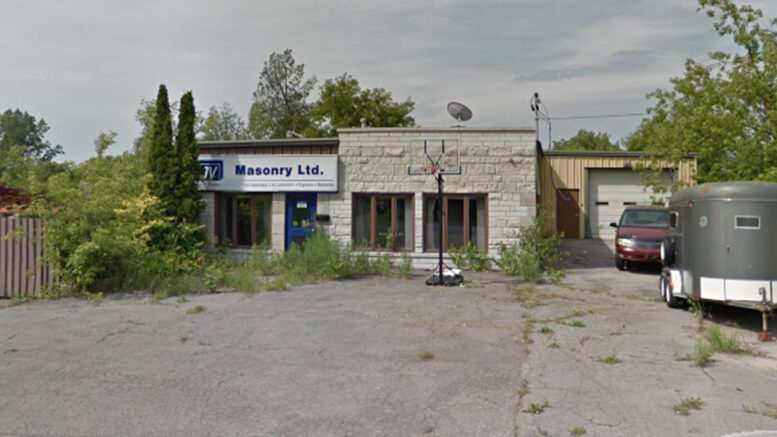 A 2014 Google Maps image of 32 Oke Rd. in Napanee. The transparency of the 2019 sale of this property has been called into question by members of a citizen run Facebook page.

A motion to conduct an independent review of the Town of Greater Napanee’s surplus property sales over the last decade was passed by town council during their July 21 virtual meeting.

Greater Napanee Mayor Marg Isbester put forward the motion, which was passed unanimously, in response to comments and accusations made on a Facebook page known as Greater Napanee Ratepayers Association.

Some on the citizen run page have called into question the sale of 32 Oke Rd., which received one sealed tender bid of $10,100 before the listed deadline of 3 p.m. on April 26, 2019 by a company registered to former Napanee mayor Gord Schermerhorn. A post by Hubert Hogle, who moderates the Facebook page, notes a second tender was submitted a few minutes after the 3 p.m. deadline and was not opened.

The property has since been sold to Chips Custom Machining. According to Hogle’s Facebook page, the property and building were sold for $100,000.

A series of posts in the group has prompted some in the 875-member group to call members of council and question the transparency of the property sale to the former mayor.

“I believe it is time that we respond to those people who have called us in the past week or so regarding statements made on Mr. Hogle’s Facebook page,” said Isbester. “As a council, we’re always ready to respond to residents regarding concerns and questions. It is our job. What we are not obligated to do is to respond to accusations, innuendos-accurate or not-from a Facebook page. That is not the way any government should operate. This statement is directed to all residents, but in particular, those who have reached out to us. There are several reasons that we can go into closed sessions. More than several. One of them being the acquisition or disposition of property. Mr. Hogle’s statements on his Facebook page reflect his idea and his beliefs and I guess of facts. As Mr. Hogle, who was our town solicitor years ago, he knows that anything done within closed session cannot be released by council until there is a time that it can be put out to the public. This is done often. And some of it, particularly when it involves an identifiable individual, or legal matters that require confidentiality, it can never be released. For all those that called us, you got the same answer, which Mr. Hogle will say that we are plotting or trying to deceive the public. Such is not the case. Tonight we as council are asking for a complete, independent review of surplus property practices, not just in recent years, but maybe going back for eight to 10 years. The results of many of these have been released, but we will ask for a review. The review should include property information, a total review of instructions to and from council, advertising methods, open market or tender process, assessments, appraisals, asking price, minimum price, whether to accept high, low or any bids and bid opening process. All should be included in the report. Also in the report should be a checklist for process in total, including closing of the transaction, release of information when the transaction is fully completed.”

Isbester included that she’d like to have the results of the study by the second scheduled council meeting in September.

Greater Napanee CAO Ray Callery said staff would source vendors and come back to council with bids on the contract to conduct the review at a future meeting, though no date has yet been set for that meeting.

“All of this process that we’re going through is to provide transparency,” said councillor Dave Pinnell Jr. “I’m sure that we’re going to hear (the day after last Tuesday’s meeting) that we white washed this issue, that we stepped around it, over stepped it, danced around or whatever. I have to say that I sure am happy that (Isbester is a) more seasoned politician than I am because the statement you made read very nice. I’m not quite sure if I could have done the same. I’m very passionate about this whole issue that has arose. I just want to make sure that everybody knows that we’re not side stepping something. We’re providing a report that is going to be very transparent.”

Isbester said council had discussed performing a review of the tax sales process prior to the activity on the Facebook page.

“This is being done as all of us, and I can only speak for council, with their permission, but I’m sure that staff feel the same way, so that perhaps we can end the speculation and the accusations of being racist, of trying to favour one bid over another, to show the public that we’ve heard their questions and want them to be answered in a clear and concise method,” said Isbester. “Also if Mr. Hogle has accusations he should be making them by deputation or even correspondence, not by social media, in my opinion. Council’s response should always be to everyone, not just those who follow his page. “

Isbester said council would be open to adopting any suggestions that come out of the report if they would be beneficial to the town.

“We have confidence that staff has fairly and justly served the public and the corporation over these processes,” said Isbester. “We believe that the study and the report will show same.”