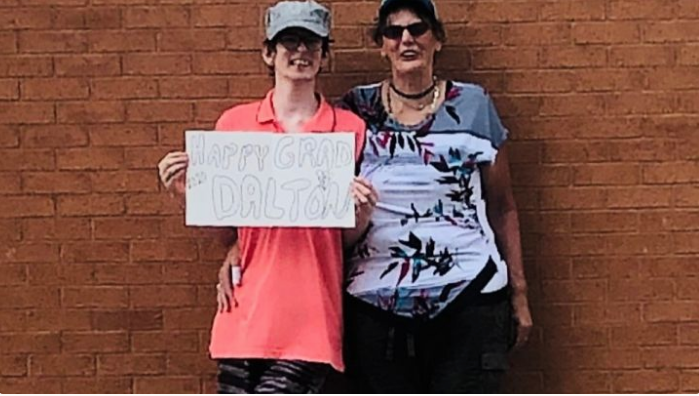 Just weeks after celebrating his elementary school graduation, Dalton Green’s world was turned upside down by the sudden passing of his mom, Mary Ann.

The news was particularly devastating for the 14-year-old as he deals with complex medical, learning and emotional challenges and relied heavily on the companionship he shared with his mom. His mother, who has raised him alone since the passing of his father several years earlier, was like a best friend to him with the pair being described as inseparable.

A pair of J.J. O’Neill Catholic School education workers-special education resource teacher Emily Thompson-Hogan and educational assistant Jane Perry-who have worked with Dalton for the last eight years, have established a Go Fund Me page to help Dalton through this difficult time. Part of the money raised will help him to move from Napanee to Northern Ontario, where his sister Aileen French has agreed to step in as his guardian.

A link to the Go Fund Me page can be found at https://ca.gofundme.com/f/support-for-dalton-green.

“He just a lot of things going on,” said Thompson-Hogan. “He’s had ongoing health issues, he’s had his own health scares, he’s had surgery upon surgery. It’s just never ending for this guy and our hearts just go out to him. As he just graduated it was just kind of the last thing we could do to give him a push in the right direction.”

This latest tragedy is just another hardship for a teen that has already gone through so much.

The family was already preparing to move to Northern Ontario within the next year but the sudden passing of Mary Ann has left Dalton in a difficult situation.

“Dalton and his mom were supposed to move in a year to be with his sister,” said Thompson-Hogan. “His mom has had health issues but there was no reason to think this was coming so soon. The plan was as her health deteriorated they would be with family but this just happened so soon and things were not in place yet. So (the fundraiser is to) help his sister out, she has her own children and just wanting to make this as easy as possible for them.”

That’s when the Go Fund Me page was launched and the community responded in a big way. They shattered their original goal of $1,200 and have already raised $10,405. The page will be left running until Aug. 8, at which point the money will be given to the family, some to help with renovations to make his new home more suitable for his special needs as well as travel costs to help him get to various support programs. The rest of the money will go into a trust fund that will help pay for medical and learning equipment he otherwise won’t have access to once he ages out of the school system.

Thompson-Hogan says teachers and his fellow classmates have been extremely generous, as has the community.

“Our school community has always come together in different ways to support families through these times of crisis,” she said. “Having COVID (going on right now), it’s not like we could all be there with them or drop off food. Our school community is also spread out from Kingston to Belleville because staff is coming from all over. It’s a hard time support someone. This was an easy way that I thought staff would be throwing in $20 here and there. I didn’t anticipate this growth. It then spread to parents in the community and out. It’s been amazing.”

Despite his challenges, Dalton has always taken the time to get involved in the community, whether its volunteering in the school’s community garden to grow food for the Morningstar Mission, or staying active with Special Olympic teams and local youth groups. Perry says his willingness to give back was just another reason they wanted to help him through this difficult time.