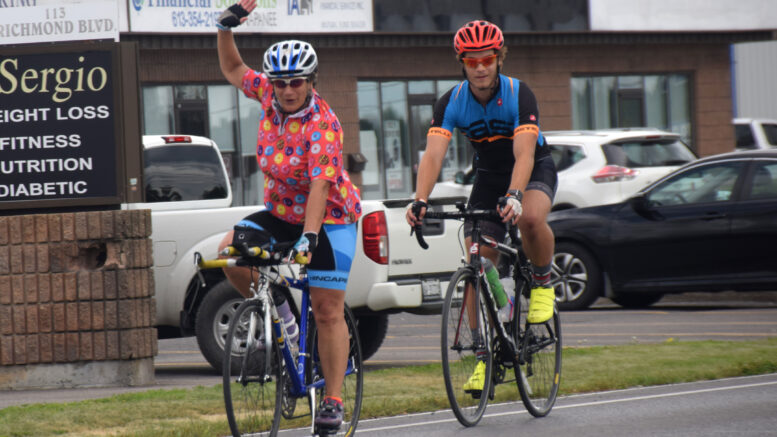 Marianne Carlyle waves as she and her son Cameron Carlyle-Locke arrive at the OSPCA Lennox and Addington Animal Centre, completing their ride from Brockville. Photo by Adam Prudhomme.

Carlyle, who manages the Leeds and Grenville Animal Centre, completed the 136 km bike ride between the two animal shelters with her son Cameron Carlyle-Locke as a way to promote the OSPCA’s ongoing Sweat for Pets fundraising campaign.

“It’s to inspire both our communities, Napanee and Brockville we work together, and all the Ontario SPCA Animal Centres work together so I wanted to get involved and inspire the communities to get out and sweat for pets,” Carlyle said of completing the bike ride to Napanee.

The duo cycled along Hwy 2, enjoying fairly good conditions for a late July morning that was neither overly hot nor too windy. They left Brockville around 5:30 a.m. in an effort to avoid the mid-day sun as much as possible.

Upon arrival the staff of the SPCA Lennox and Addington Animal Centre, including local manager Esther McCutcheon, greeted them.

The bike trips are her own take on the SPCA’s Sweat for Pets campaign, which calls on animal lovers to complete a series of challenges while collecting pledges to be donated to their local animal centre. Each week a new challenge is posted to SweatForPets.ca and calls on people to share pictures and videos of themselves completing the challenges to social media. They’re also encouraged to come up with challenges of their own during the 10-week campaign.

“I looked at what I could do to incorporate all the centres and this looked like a good goal from 10 weeks out,” she said of her long distance cycle rides. “The last week of this campaign I’m planning to do a ride to Pembroke, that’s 210 km.”

A former triathlete who was inducted into the Brockville and Area Sports Hall of Fame, Carlyle is no stranger to pushing herself to the limit. Doing it for the benefit of animals might make it just a tad bit easier for her.

“As a not-for-profit organization, the Ontario SPCA and Humane Society depend on the generosity of donors to change the lives of animals,” she said. “As a result of COVID-19, we have had to take a virtual approach to raising critical funds this year. By taking part (in the Sweat for Pets challenge) you are providing nutritious food, veterinary care and a second chance to animals in need.”

Earlier this month the Lennox and Addington shelter opened for contactless adoptions. Appointments can be made by calling 613-354-2492 or by visiting OntarioSPCA.ca/LennoxAddington.