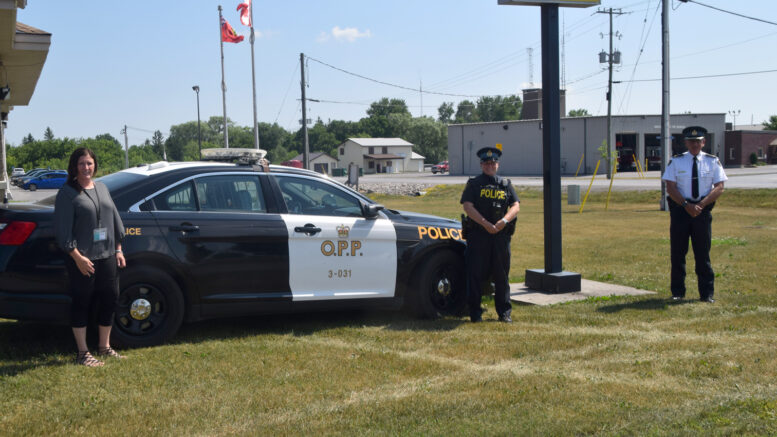 How police officers respond to calls involving a mental health crisis has been a hot button issue of late, to say the least.

As police detachments across the province explore different ways of dealing with the situation, a pilot project partnership between the Lennox and Addington OPP and Addictions Mental Health Services Kingston Frontenac Lennox and Addington has already seen positive results.

Launched in March, the Mobile Crisis Intervention Team (MCIT) sees AMHS-KFLA’s Shelley Hagerman partner with the OPP’s community safety officer, Cst. Shannon Cork. It’s a unique setup in that Hagerman has an office within the detachment and keeps ongoing contact with people suffering from mental health issues who have had run-ins with police. Her role is to work on the underlying issues and connect people to services that will help treat their illness and ideally divert them from a hospital or a further incident with police.

“Lots of successes have come out of the program,” said Hagerman. “If an officer attends and there’s mental health or crisis concerns, they’ll secure the area and call me directly and I’m able to support them at that time. There’s been lots of times where we’ve been able to avoid taking them to hospital and connecting them to the services that they need and de-escalating the crisis. Just working with the officers is a big piece of this. That doesn’t need to be their role, that’s our role as a crisis worker. They can be there to support us and we can be there to support them.”

A big part of her role is to follow up with calls the next day and to direct people to services that can help them and ideally avoid any future incidents that require police.

“The thing with crisis is it looks different for everybody,” said Hagerman. “It can be something very small that triggers somebody. It could be financial issues. It could be relationships, it could be anything. It may not be an underlying mental health issue but it could cause somebody to go into crisis. Intervening and being from the community and having awareness of the partners and what’s available is also quite helpful because I’m able to make those connections and do that intervention and provide that crisis line number so that they have that option the next time they need that support or someone to talk to. Not everyone needs that one-on-one support but just knowing there’s somebody out there they can call is reassuring.”

Though the launch of the MCIT comes at a time when a movement to ‘defund the police’ and allocate funds elsewhere has been gaining traction across North America, this program is actually one L&A OPP detachment commander Insp. Scott Semple has been pushing for since 2012.

“We didn’t invent the wheel,” said Semple. “Other OPP Detachments have similar programs but I think this is the first one that I’m aware of that has actually been a true partnership between Mental Health, our agency and the police where it’s a very sustainable funded, Shelley is an employee of Mental Health, a lot of other programs have started in relying on funding grants and then the grant runs out and then they scramble to save the program.”

Semple says they needed to adapt a program that would work for this region.

“We’re very rural, spread out over a huge geographical area,” said Semple. “We’re not the city of Kingston, we’re not the city of Belleville. We’re a busy detachment; we have 50,000 people in our county. We’re probably answering as many calls as a municipal centre like Belleville. We’re just spread out. To put a crisis worker in a cruiser doesn’t work so we came up with a model where we would have a worker embedded in the detachment who may be able to go with an officer once a situation has been secured and de-escalated and it’s safe for that person to go in there. The other piece is follow up. We may go to a call in the middle of the night or go to a call in the Addington Highlands where it wouldn’t be feasible to have a worker driving around in a car. Shelley can follow up.”

Along with MCIT, Semple says the OPP has been training its officers to learn how to de-escalate an immediate situation to lead to the best possible outcome.

“The recent press about police interaction with people suffering from mental health in crisis hasn’t been positive,” said Semple. “But I would argue if you look at the totality of all the calls, there’s a lot of positive and there’s been a lot of innovation and partnership building with things like the situation table, community safety planning, a community safety officer and crisis workers. The public doesn’t always see that has been happening and all that is happening to actually deal with people in crisis much better.”

“Even within the last several months I can think of many calls we’ve gone to where people have been brandishing weapons and our officers have used other tactics other than lethal force to actually get the person under control and get them to a hospital or get them the help that they need,” added Semple. “Unfortunately those stories aren’t often told.”

Semple says police would actually prefer to not have to respond to calls involving a mental health crisis but says it’s often necessary.

“We’re the end of the rope,” said Semple. “There’s lots of opportunity on that rope to stop it but it didn’t happen. Unfortunately we’re in a situation where somebody is in a crisis and they’ve armed themselves and really we have to go to protect them and the public and anybody else involved. We would prefer the police never have to go to those calls. That’s not the system we have yet. We’re actually interested in this conversation that’s going on about funding an alternative response to crisis. Absolutely what I want, I don’t think there’s a police officer that I know that wouldn’t prefer to not have to go to those calls because they’re very difficult calls to deal with and we’ve seen the outcome of some of those calls in Ontario and they’re not things that police want to be involved in, but who else can go? If you’re talking about sending a crisis worker into a situation with somebody wielding a weapon, that’s not going to be a good outcome for anybody.”

Semple says they’re hoping to expand the MCIT program to further include someone who specializes in addictions.

“It isn’t about arresting our way out of that problem because that’s not going to happen,” said Semple. “Anybody that thinks that’s a solution is not thinking clearly. We still have to reduce victimization and we have to prevent and we will continue to do that, but it is a huge social issue that needs to be addressed throughout society, not just the police.”

He’d like to have an addictions specialist available to reach out immediately to someone who has been caught at the scene of a major drug bust.

“We often come across people (at the scene while executing a search warrant) that are there that aren’t necessarily the people we were looking for,” said Semple. “To me that’s a pivotal time to offer addictions support. They’re thinking ‘my dealer just got arrested’ and that’s panic time for them as an addict. Maybe that is the window to actually offer them support.”

With the success of MCIT, Semple hopes to continue to grow the program and work with other agencies such as Family and Children services as well as Social Services.

“I don’t see it as defunding, I see it as funding appropriate resources and letting us get back to what society wants the police to do, and that’s to make the community safe looking at things like traffic,” said Semple. “If our time is taken away dealing with other things, we can’t do that. We still do it, but it would be nice to have more resources that aren’t dealing with social disorder issues and actually out investigating crime and making the roads safe and keeping the community safe.”