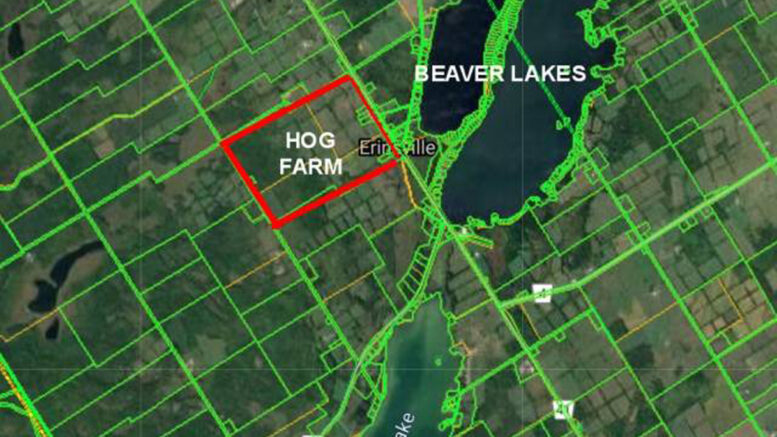 A map showing the location of a proposed hog farm in Erinsville.

Stone Mills council has requested a handful of agencies offer their input on an outside group’s report calling into question the location of the proposed hog farm in Erinsville.

Deputy reeve John Wise put forward a series of successful motions that called on council to hear input from OMAFRA, the Ministry of the Environment, Quinte Conservation, KFLA Public Health and XCG Consultants Ltd. regarding a report put together by environmental consultant Wilf Ruland.

The CCCE, who hired Ruland to conduct the study, presented the report to council during Monday’s virtual meeting, which was broadcast on the township’s YouTube channel.

The CCCE has long opposed the location of the proposed hog farm, arguing it’s too close to Beaver Lake and ground water that runs under the property has the potential to contaminate local waterways and neighbouring private wells. In June the group was unsuccessful in asking for Stone Mills to delay issuing a building permit to Mark Slack of Slack Family Farms Inc.
“The township of Stone Mills council is on record stating if there’s new technical information indicating risk to the community in the Slack Family Farm’s proposed intensive livestock operation, then at that point in time the project would be stopped,” explained Mark Oliver, who spoke on behalf of the CCCE. “To that end, the CCCE has provided a report from the expert hydrologist Wilf Ruland stating that the proposed location is unsuitable for an intensive livestock operation. It’s too close and upgradient to the Hamlet of Erinsville and Beaver Lake. The soil is highly permeable and rests on fractured bedrock with karst features. There’s a risk of contamination reaching neighbour’s wells and the pristine neighbouring waterways.”

Oliver noted the report had also been sent to OMAFRA, the MOE and Quinte Conservation.

To that end, Wise moved that council ask for their response to the report, as well from KFLA Public Health and the outside private consulting firm the township had hired to do the initial study of the property. Council set a limit of $500 to be paid to the firm for their response to Ruland’s report.

“We’ve got a significant amount of community concern here, we’ve got a report from a credentialed hydro geologist who has worked on some pretty high profile projects in the past,” said Wise. “It doesn’t hurt to have a thorough airing of all the personal and professional opinions because this is a pretty big deal locally. I don’t think it hurts.”

“Let’s get some response from them,” Wise said of the agencies. “If they say everything’s copacetic, with these added conditions, fine, we can go with that. If they say holy smokes, we never thought of that, thank goodness Mr. Ruland pointed that out, in that case we’ll see at least a pause or perhaps a halt to the project. I would also suggest that the Slacks I’m sure would not want to be proceeding with a project feeling confident that everything’s fine and then find out down the road that there was an oversight that results in compromising their operation in some significant way. Something like the Ruland report is a good if you want, final test of the analysis that I don’t think it’ll hurt at all to go through.”

Reeve Eric Smith supported the motion, but had some concerns about any bias that may have been present in Ruland’s report.

“If you’re a group of people or something, and I read the report, and some of Mr. Ruland’s thing we rushed into this or that, well there had to be some good information handed from the concerned citizens. Usually if you’re paying the bill, a lot of times, you can get a report you want to hear,” said Smith. “I don’t think all of that report was done by Mr. Ruland. Anyway, that’s just my own concern on that.”