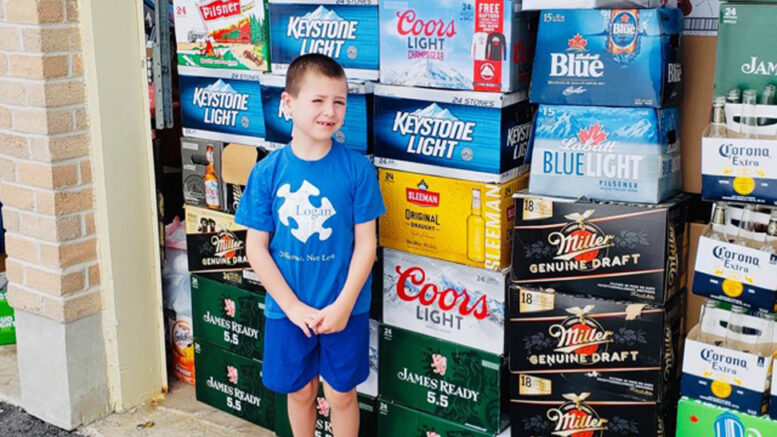 Eight-year-old Logan Piontek stands next to some of the bottles that were donated by the community to help him raise money for a service dog. Submitted photo.

A disciplined four-legged companion would be a huge help for him and his family, as he is non-verbal and has no concept of danger. The family is working with Kingston 4 Paws Service Dogs, which provides families with fully trained dogs. The cost to train a dog is about $20,000 and there is a two-year wait list. The family has been on a list for about a year.

“Logan was diagnosed with autism and cerebral palsy at the age of three,” said Ashley Piontek, Logan’s mother. “He’s non-verbal so is lack of communication is definitely trying for our family. We know what he wants but not necessarily does the public understand what he wants. For a service dog it will help with outbursts that he may have, if he tries to walk away from us in public setting we can give a command to a service to halt because it will be attached to his waist and then he can’t get away. The service dog will definitely help with his everyday life skills such as he does pinch and scratch once in awhile so a service dog would definitely help with those behaviours and hopefully get him to stop that.”

A service dog would also assist Logan with deep pressure therapy, which is used to help people with sensory sensitivity to feel at ease when they experience episodes of being stressed, anxious or overwhelmed.

Terrilyn Geenevasen, a friend of the family, is currently organizing an online auction and is accepting donated items until July 19. A Facebook group titled Supporting Logan’s Quest For An Autistic Service Dog Online Auction has been established and will serve as the platform to arrange donations and make bids.

“(Kingston 4 Paws) ask you to fundraise money to help because they don’t get paid for what they do,” explains Ashley. “They ask for your support. If you can’t raise the full amount, that’s not an issue, that doesn’t stop somebody from getting a dog for their child. The money is just going directly to training the dog.”

Fundraising in the middle of a pandemic has added an extra challenge, but the family has been creative. Last week they hosted a ‘fill the driveway’ challenge, asking the community to drop off any empty bottles to their driveway. They plan to host another weeklong bottle drive after the long weekend in August.

“We’re extremely proud to be from Napanee, we were both born and raised in Napanee,” said Ashley, along with her husband Scott. “It’s really great to see how this community can get act as one, especially during such a hard time in the world.”