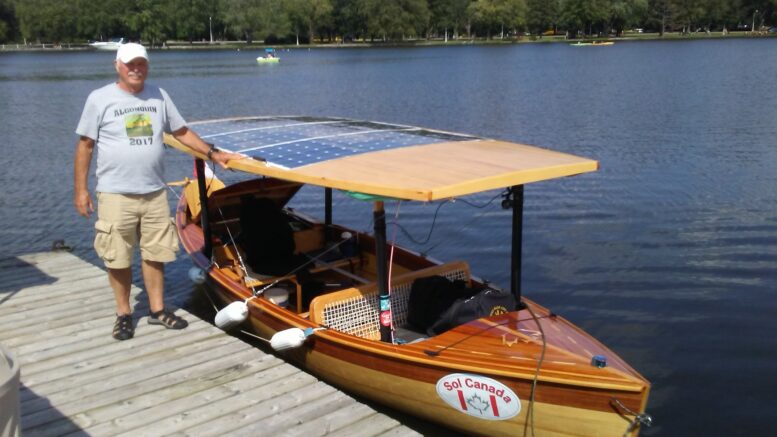 Phil Boyer has big plans for his next solar powered voyage-but he’s going to need a bigger boat.

The Napanee native has kept himself busy during the lockdown doing just that, assembling the frame for an 18-foot-long, eight-foot-wide catamaran, which will be 100 per cent powered by the sun.

A pioneer in the boating community, Boyer has already completed several long treks in his solar powered Disappearing Propeller Boat Company style wood strip boat known as Sol Canada. Boats that were popular circa 1916 inspired the basic design of the craft. He hand built his boat between 2014 and ’16 and added his own personal touch when he affixed solar panels to the top of Sol Canada’s canopy. He’s since piloted the boat from his home on the Napanee River to the Trent-Severn Waterway, which is over 386 km of rivers and lakes, to Georgian Bay, all on solar power. He’s also gone Kingston to Ottawa using only the sun.

“I’m claiming to be the first person to do the Rideau Canal on 100 per cent solar electricity,” said Boyer. “A pontoon boat in 2006 did the trip but they plugged in along the way at least once.”

A retired electronics technician, he built several kayaks and canoes before designing the Sol Canada.

“I’ve done wood strip canoe building before so I thought there was no reason I couldn’t do a wood strip concept so that’s kind of what I did,” Boyer said of the Sol Canada. “You make forms then you lay your strip around it and then you sand it and fiberglass it. Then it’s sanding and glassing and then figuring out how to make it run because it’s not like this written down anywhere.”

His voyages have earned him some fame among his fellow boaters as he’s been featured in the U.S. based Small Boat Monthly magazine as well as several local Canadian publications and news broadcasts. He says other sailors often ask him for a photo when they encounter him while out on a lake or river.

In 2017 the Napanee Beaver covered a story in which Boyer tracked the solar eclipse while docked at the Napanee River by recording how much energy his engine was drawing.

As reliable as Sol Canada has been, he’s ready to move on to his next project.

“My next trip is when I’m going to have that new boat, my new solar electric boat, I’m going to re-do the Rideau Canal and then I don’t know if I’ll do it in the same year, but I’ll re-do the Trent Severn, that was an amazing trip,” said Boyer.

His new design will also allow him to tackle tougher courses, such as circumnavigating Prince Edward County, which he wouldn’t be able to do in the smaller Sol Canada. He learned that the hard way after experiencing a close call on Lake Simcoe.

“When I crossed Lake Simcoe, that was scary,” recalled Boyer. “It took me four hours to get from the exit of the canal to Orillia, all out in open water. Lake Simcoe that day had long rollers. It doesn’t look that big but you come up over them and then you come crashing down, very similar to ocean waves. It’s not choppy, it’s big rollers. I had water coming up over the sides and I’m out in the middle of nowhere wondering if my cellphone will be able to call anybody.”

He reached the shore safely but soon after vowed to work on a bigger design before he took on Lake Ontario. His new boat will also offer a much higher top speed. Sol Canada’s top recorded speed is 11.5 km/h. He expects his new boat will be able to hit 30 km/h.

Those speeds, or whether or not he can go anywhere at all, are all at the mercy of Mother Nature.

“You need to have a battery bank that you can rely on for two days at a slow speed,” Boyer says of counting on solar to power his boats. “I also carry with me for emergency purposes a charger and an extension cord that if I had to, I could plug in. The whole idea is not to do that. I found by simply monitoring my speed, like on an overcast day and you’re going to get sunny for a minute, then cloud for the next minute. That would mean I’ll have to slow down to maybe six or seven km an hour. At that speed if I’m going six km an hour, I could go two days, 100 km easily on the battery bank without taking it below 60 per cent. If I cranked it up to 11 km an hour, I would be able to go for maybe one hour and the batteries would be dead. The power drain is exponential to the speed.”

Before embarking on any trip, he researches his distances and calculates how far he wants to go on a given day before docking for the night at a lock.

He’s documented his previous adventures with several YouTube videos, which can be found by searching his name. He does caution however there is a musician with the same name who can also be found on YouTube-there’s no relation.

“I’m not a singer, I don’t like Country and Western,” he joked.