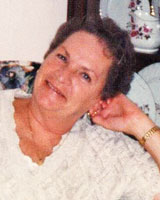 Please share your memories and condolences with the family at www.paynefuneralhome.com