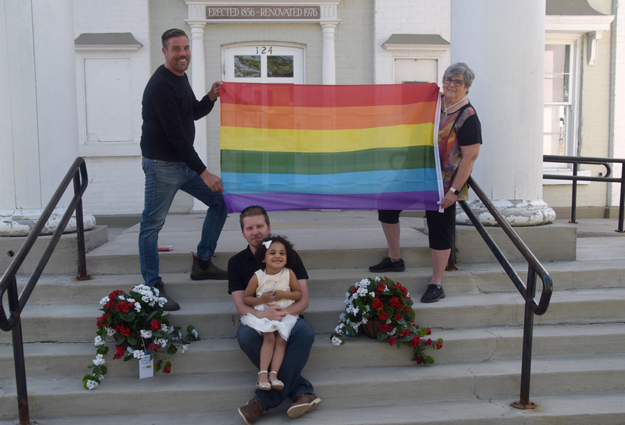 Though the informal event was low key, it was a symbolic one to show the town’s support of the Lesbian, Gay, Bisexual and Transgender (LGBT) community. Last June Beauchesne made a deputation to council, calling on the town to officially recognize Pride Month, which is observed every June across North America.

“I grew up here and I know there’s a lot of open minded people,” Beauchesne said of why he made the deputation last year. “We were very silent on the subject and every other town around us was doing wonderful things so I thought it was time for Napanee to get on the map, especially being a member of the community.”

Following that 2019 deputation, deputy mayor Max Kaiser put forward the motion that the town officially recognize Pride Month and added that in future years they would have discussions leading up to Pride Month to be better prepared to observe it. Isbester added a friendly amendment, calling for the formation of a committee to be part of those preparations.

“I grew up around Max Kaiser who is now part of council, I grew up working on his father’s farm,” said Beauchesne. “It’s nice to see full circle all of these people supporting and coming together as a community.”

Fast forward to 2020 and COVID-19 has cancelled all formal celebrations amid the state of emergency, including Pride Month celebrations. Instead it was a simple gesture to keep the momentum going for next year.

It wasn’t that long ago that the simple act of displaying a rainbow flag outside a municipal building would have been deemed controversial.

“It isn’t so much resistance as it is lack of understanding and I think we’ve all come a long way,” said Isbester. “(Pride Month recognition is) not really led by the town, it’s aided by the town and supported by the town, but it would be like us saying we’re going to celebrate the Raiders’ success in the Tubby Schmalz Cup. We didn’t do it, we’re not part of it. We can help with the celebration and that’s the way this should go.”

Council is expected to vote at their next virtual meeting on June 9 on a location to fly the Pride flag to formally recognize the month.

Isbester noted the town would follow through next year by following the guidance of a community led committee for next year’s celebrations.

“This isn’t the only thing that we’ve missed for a celebration or an anniversary,” noted Isbester. “Women’s Institute is 105 years old and that couldn’t be recognized. There’s more and more things that we couldn’t go with. Even Canada Day is tipsy. We’ll have something virtually but many of them around us, our fair has been cancelled.”

Ever the optimist, the mayor plans to make up for lost time once COVID-19 restrictions are lifted.

“Everything is as important equally, we’re going to have to spend 2021 and 2022 just partying,” she added.