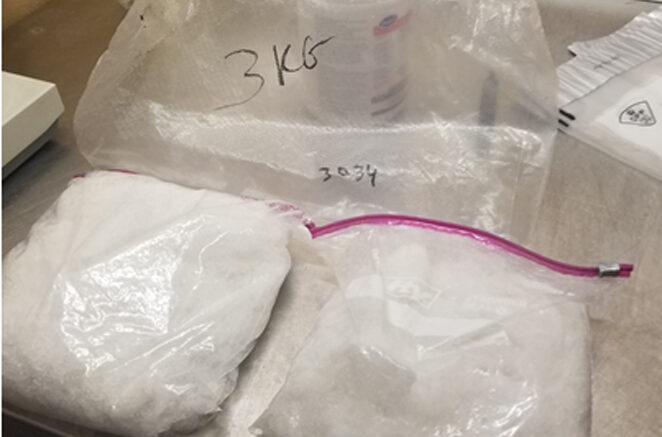 Police say they found a large quantity of meth inside a vehicle that was travelling at a high speed along Hwy 401.

An investigation by the Ontario Provincial Police East Region Community Street Crime Unit (CSCU) led police to a vehicle that was being operated on Hwy 401 at 1:30 a.m. on May 28.

Police attempted to stop the vehicle but it failed to pull over and attempted to flee, driving in a dangerous manner. Police were able to get the vehicle stopped through the use of a tire deflation device at Hwy 401 and Wallbridge-Loyalist Road.

Two people who were the occupants of the vehicle fled from the vehicle on foot but both were apprehended a short time later with the assistance of an OPP canine and the Emergency Response Team (ERT).

A large quantity of suspected methamphetamine (3 kilograms) was seized from the vehicle.

The two occupants from the vehicle remain in custody and will appear in the Ontario Court of Justice via video for a bail hearing.

A 29-year-old of Quinte West has been charged with possession of a schedule 1 substance for the purpose of trafficking, possession of proceeds of crime under $5000, resisting a peace officer, dangerous operation of a motor vehicle and flight from police.