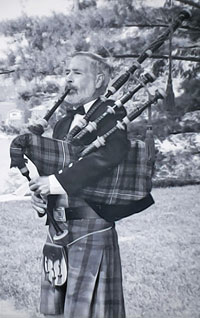 It is with profound sadness that we announce the death of Charles William Robertson, on Friday May 22 at 10:30 a.m. Charlie Bill, as he was known in his early years, was in his 85th year. He married Elizabeth Walsh in 1961 and his legacy includes five children, nine grandchildren and one great grand-child. Charles was a compassionate man of strong moral fiber with a wry sense of humour. His life was an amazing adventure. It started in Buchans, Newfoundland, before it was part of Canada. As a teenager he lived on the Robertson family farm west of Cornwall, Ontario, until the land was expropriated to build the St. Lawrence Seaway. His family later settled in Napanee, Ontario, and he graduated from Queen’s University where he met the love of his life, Betty Walsh. He became a Chartered Accountant and later a business professor, who was well respected by his students. After seven years of rural living in Moscow, Ontario, he and Elizabeth packed up their 5 young children and moved to Tanzania. He went on to guide the financial management of railway infrastructure in Tanzania, Sudan, Uganda and Egypt. After 27 years of service in Africa, he returned to Canada and settled in Ottawa. In his heyday, Charles, a beautiful diver, was on the Queen’s University swim team, was an avid tennis player and a dedicated member of the Napanee & District Pipe Band. He was known to take to the fields with his bagpipes and regale the neighbours with renditions of traditional pipe music. He was a boy scout leader in Camden Township, a manager on the Tamworth hockey team and rarely without a dog in his home no matter where he lived. His many life experiences include climbing to the rooftop of Africa, (Mount Kilimanjaro), out running an angry elephant, and narrowly escaping a boat explosion in the Indian Ocean. Charles loved numbers. He volunteered his services during income tax season and as the accountant for the Rideau Tennis Club in Ottawa where he and Elizabeth were enthusiastic members. In his final years, Charles had Alzheimer’s but still maintained his wry sense of humour and his kind ways. He is predeceased by his father Albert (Robbie) Robertson, his mother Millicent (Aggie) Robertson (Mews) and his brother Edward (Fast Eddie) Robertson. He is survived by his beloved wife Elizabeth, his children, Liam (May), Erin, Kate, Martin (Janet) and Drummond (Shelley), and grandchildren, Niall, Bryna, Seamus, Madeleine, Aidan, Teagan, Isabelle, Hayden and Callum and his great-grand daughter Hazel. A family service will take place in Ottawa on May 29, 2020.