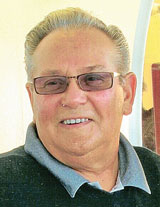 A wonderful husband, father and Dido has gone, leaving his family to remember him with love. It is with great sadness the family of Eugene Beyba announces his unexpected passing at the Lennox & Addington County General Hospital on Sunday, May 17, 2020 at the age of 78. He was the son of the late Miron Beyba and Anna Kosarenko. He leaves his wife of 54 years, Violet Beyba, his son Brett Beyba (Martha) of Markham and his grandchildren Anna and Megan Beyba. He leaves his cousin Natalie Parker (Roger) of New Port Richey, Florida and his brother-in-law Thorpe Holden of Napanee. Predeceased by his son Trevor Eugene Beyba (1972). A private family burial to take place. Arrangements entrusted to the Wartman Funeral Home in Napanee. Donations to the Lennox & Addington County General Hospital or Diabetes Association would be appreciated by the family.