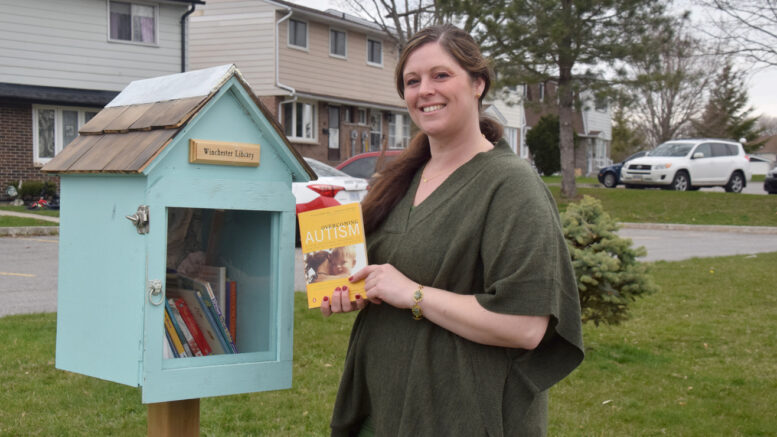 Mandy Stapley shows off one of the books that can be found inside an outdoor little library, located on Winchester Drive in Napanee. Photo by Adam Prudhomme.

Extra time on her hands due to ongoing isolation, Mandy Stapley made good use of it by completing her year-long goal of creating a little neighbourhood library.

Located on Winchester Drive in Napanee, the light blue box sits atop a wooden post, complete with a shingled roof and glass door. Inside is a collection of books that is free to anyone who passes by, operating on a sort of take a book, leave a book basis.

Book genres found inside will cover a wide variety, but Stapley made sure to include some on a topic very near to her-autism. She’s a proud mom of an autistic son, Hank, as well as one of the founders of the Lennox and Addington Community Autism Network.

“Sometimes we’re out here and I don’t know if people know he has autism, he’ll have a meltdown and people will just stare,” Stapley said of her son. “I just want people to know that it’s ok to say hi. He wants to be out here and he wants to hang out and he wants to interact with the kids. I’m just trying to do a little educational piece with that stuff.”

Books on autism are just a smart part of the neighbourhood library exchange program. Stapley says she was inspired by several other community libraries she had seen, in particular one on nearby Slash Road, as well as several others in Ottawa. After a bit of research on Pinterest, plus help from some family members, she finally took the time to complete the project. She says she had the idea about a year ago but until now never had the time to follow through with the project.

“I just thought they were so cute and I love seeing them around. They’re so big in Ottawa,” she added. “I thought what a great way to bring a community together and get people out talking.”

She’s also included a bag of sanitizer wipes in the box for guests to use in order to prevent the spread of any germs.

Already featuring a modest collection of books, she hopes more people will add to it.