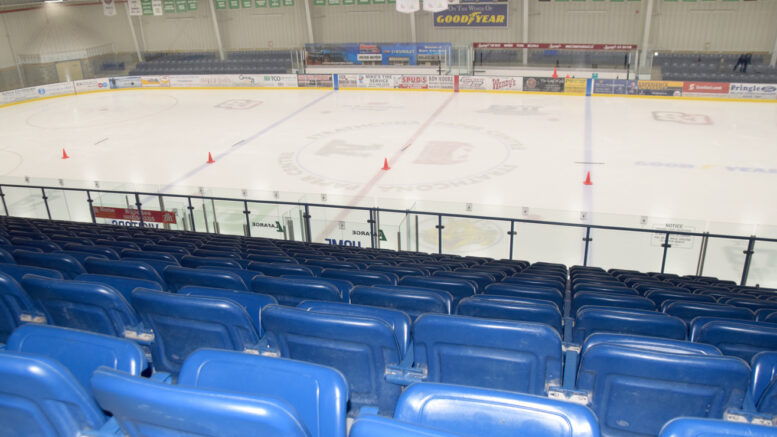 Napanee's Strathcona Paper Centre Goodyear ice pad, usually bustling with activity this time of year, is empty due to the provincial lockdown. Photo by Adam Prudhomme.

A decision to reopen the sites, which were closed due to COVID-19, was made during a virtual town council meeting held on Thursday, which was streamed on the town’s YouTube channel. In a close 4-3 vote, with councillors John McCormack, Terry Richardson, Ellen Johnson and Bob Norrie voting ‘yes’-council passed the motion to open the sites. The option to open the site was the second of three proposed by town staff. The others options not selected were to leave them closed or open with limited services.

Among the precautions are that attendants will be provided with sanitizer equipment, barriers placed between staff and the public entry area, no more than two vehicles on the site at a time, residents can’t exit their cars until they’re at areas of unloading and no handling of money.

If bulky waste is collected, there will be a surcharge of $10, cash only, to be placed in the deposit box.

Bag tag fees will continue to be waived for the time being, with households limited to three bags placed at the curbside per week. That same three bag limit would apply to those coming to the waste disposal sites.

-Council voted to delay hiring summer students for the time being, though they left the door open to re-examine the notion if any new information becomes available.

In the meantime the town has applied for nine funding grants to offset the hiring of summer students. At the time of the meeting they were still waiting to hear back if they were successful in any application.

-The town is in the process of gathering information for homeowners concerned about possible flooding.

The COVID-19 outbreak has added an extra wrinkle to the planning, as it has made the solution of sand bagging a property essentially a non-option.

“The largest issue is sandbagging,” Greater Napanee CAO Ray Callery told council. “With conversation both with the (town’s) consultant and with a pandemic currently going on, you can’t socially distance and sandbag. Between the weight of the bags and the actual process of sandbagging a property, it doesn’t make a lot of sense with a pandemic going on. Other options are what are being explored.”

Callery said they will be sending a public notice to residents who attended an open house on the issue last fall, as well as to the general public.

“Right now our main communication to land owners is to make sure that they’ve talked to their local insurance provider and understand exactly what their policy does provide,” said Callery. “Socially distancing and sandbagging is a real issue and we need to get that message out and that there are some possible alternatives. We can try and link people up but we can’t necessarily be in the business of providing those services.”

“I’m certainly getting calls from people who want to know that we’re doing something for them,” said Kaiser. “I take some positive light from the fact that it looks like the projections are we’re going to be below 2017 levels. We currently are below 2017 levels and should stay there, maybe, probably. That’s small consultation for people that still have waves lapping on their shore.”

-With so much uncertainty due to COVID-19, Greater Napanee Emergency Services has decided to cancel all request for tenders for its fleet at this time.

-Greater Napanee’s Strathcona Paper Centre would serve as an overflow for critical care patients if local hospitals get overwhelmed.

That was one of the takeaways from a recent visit from Kingston Frontenac Lennox and Addington medical officer of health Dr. Kieran Moore.

“Kieran Moore from the Health Unit came in to have a tour of L&A County General Hospital and meet with Dr. (Kim) Morrison (chief of staff at LACGH) and he had asked to meet with me as well,” said mayor Marg Isbester. “He’s very proud of what our area is doing to keep this COVID-19 under some kind of wraps and staff from both (L&A) County and the town gave him a tour of the SPC because at some point it may be the area (for patient overflow). Hopefully they never have to use it to facilitate an over flow of critical care patients.”